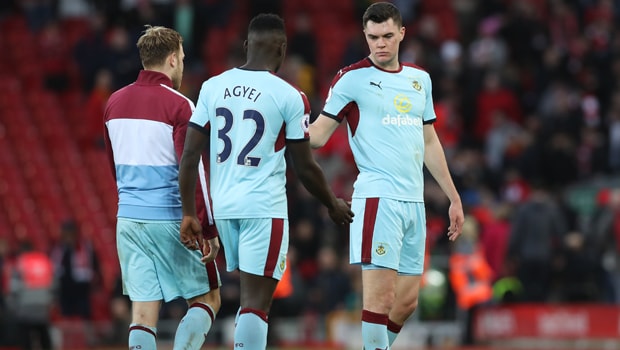 Michael Keane has vowed to keep working hard at Burnley after playing in both of England’s games during the recent internationals.

The Clarets star has been excellent for his club this season, kicking on from his fine campaign last term in the Championship to establish himself as one of the Premier League’s top defenders.

Keane’s exploits led to him winning his first England cap in last week’s friendly defeat in Germany and he did enough to keep his place for Sunday’s win over Lithuania.

With a number of clubs believed to be tracking his progress, the 24-year-old could be forgiven for getting distracted.

However, 13th place Burnley still have work to do to guarantee their top-flight spot for next season and Keane appears as focused as ever.

The former Manchester United youngster admits he has been pleased with his improvement under the guidance of the club’s coaching staff and is now determined to ensure he keeps on developing.

“I think I’ve improved massively defensively. I feel like the gaffer, Woany and Tone have drilled into me every day the need to defend right and do the basics well; heading it, clearing it, organising,” the 24-year-old said.

“I feel like I’ve become more of a leader on the pitch and I feel much more confident from playing games and getting all that experience.

I’ve come on leaps and bounds since I’ve been here but I know that I’ve got to keep improving and there’s a lot more to come.”

Saturday sees Burnley welcome Tottenham to Turf Moor for a game they are 5.50 to win, with the draw 3.80 and the Lilywhites the 1.67 favourites.