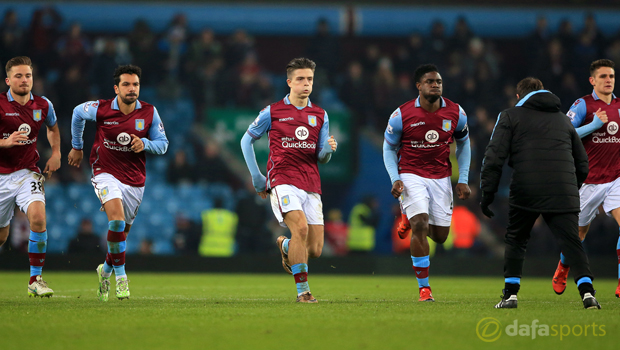 Micah Richards says the whole Aston Villa team are ‘hurting’ right now but the captain has vowed to keep on fighting for the remainder of the season.

The 27-year-old, who made five appearances for Great Britain at the 2012 Olympics, played the full 90 minutes on Tuesday night in the 3-1 defeat to Everton.

It was the 18th defeat for the Villans this season and Remi Garde’s men remain rock-bottom of the Premier League with a mere 16 points to their name.

There were also huge protests at Villa Park with many fans staging a walkout in the second half to demonstrate their anger at how Randy Lerner has been running the club.

Many have already backed the West Midland outfit to drop down to the Championship and, with just 10 games remaining, the club face a difficult challenge to avoid relegation.

Richards, who arrived last summer on a free transfer, expressed his disappointment at the Everton defeat but the skipper insists his side will continue to give everything they have.

“We will keep going. We are not giving up. We will keep believing,” he said. “I know it’s hard for everyone associated with the club, especially the fans.

“I feel their pain because Aston Villa – in this situation – it’s hard to take. That goes for the players too obviously. It’s hurting us all.”

Villa are back in action on Saturday when they travel to Manchester City and the visitors are priced at 15.00 to clinch just their fourth win, a draw is on offer at 6.50 with the Citizens installed as heavy 1.18 favourites.

Manuel Pellegrini’s men won the last meeting between the pair 4-0 in the FA Cup at the end of January but the reverse league fixture – Garde’s first game in charge – ended in a 0-0 draw.