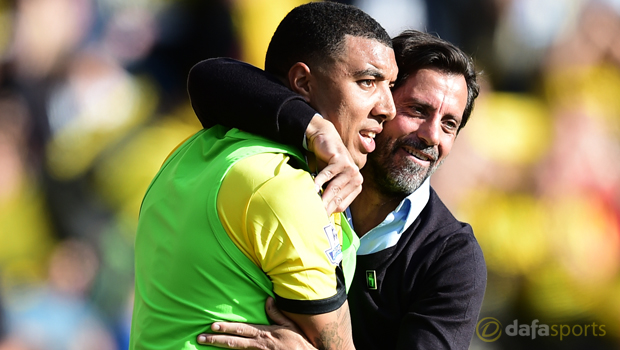 Troy Deeney believes he could provide a different striking option for England at Euro 2016 and is hoping Roy Hodgson will at least consider him for a place in his squad.

The 27-year-old has been in brilliant form for the Hornets this season and his partnership with Nigerian Odion Ighalo has put the club right in the hunt for a European finish.

Deeney has bagged eight Premier League goals while also registering the same amount of assists in what has been an impressive campaign so far.

There have been murmurs of a possible England call-up for the Birmingham-born star but, as things stand, he has yet to be included in any of the senior squads.

Arsenal’s Danny Welbeck and Liverpool’s Daniel Sturridge have also been used by the former Liverpool boss and the duo have put themselves back in the frame after recently returning from injury.

However, Deeney says he can help the Three Lions in other ways and is adamant he could produce on the international stage if given the opportunity.

“I am different to all of them. I would like to think, if he [Hodgson] is looking at another option — like Andy Carroll and Ricky Lambert at the last two tournaments — I could fill that,” he said. “The only thing I can do is keep performing like I have done all season.”

England, who are on offer at 11.00 to win the tournament, have been drawn against Wales, Russia and Slovakia and the 1966 World Cup winners are priced at 1.91 to win their group.