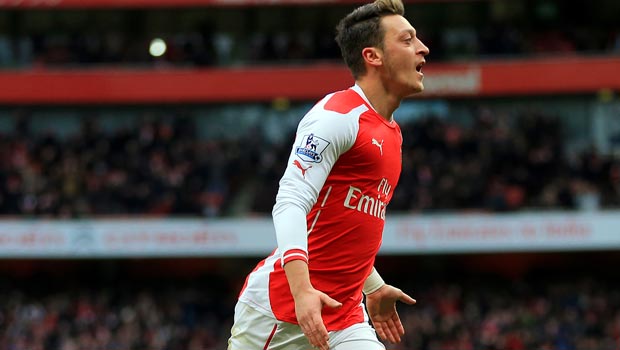 Arsenal’s Mesut Ozil says he is “really happy” at the club and insists he has had no thoughts about leaving the Premier League in the summer.

The Germany international arrived in north London for £42million in 2013 from Real Madrid but the 26-year-old has struggled to adapt to life in the English top-flight since.

The midfielder only managed to score five times from 25 Premier League appearances in his first season at the Emirates and things have not got much better this term.

Ozil has found the back of the net on only three occasions domestically and there are reports suggesting a summer exit back to his native country could be on the cards.

injuries have been a big hindrance to Ozil this campaign with the midfielder missing three months due to a knee problem that was noticed whilst on international duty.

Arsenal are on course to defend the FA Cup, having made it to the semi-finals by beating Manchester United in the previous round, and they are currently third in the Premier League.

Ozil is hoping to play a big part in the remaining games and insists his future is with the Gunners and nobody else.

“A return to Germany is not an option for me right now. I am really happy at Arsenal and I want this to continue,” he told German paper Express.

“I played in the Bundesliga and at Real Madrid. But the English Premier League is the strongest league in the world. Opponents never give up.

“Even if we’re 3-0 in front with Arsenal, the players never give up and fight until the very last second. You can only succeed here when you’re on top level physically.

“I’m working as hard as I never worked before in my life. My body is more stable and I feel fresher. You need that in England.”

Arsenal travel to Newcastle on Saturday in the Premier League as they look to overhaul Manchester City in second place, with just a point currently separating the two sides.

The Magpies are the outsiders at 5.47 while the visitors at firm favourites at a price of 1.59.