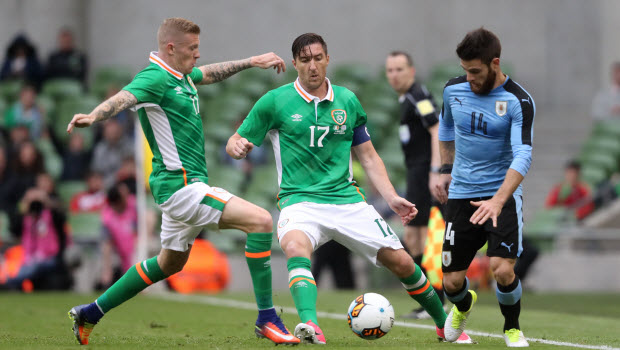 James McClean says the Republic of Ireland are going to “leave no stone unturned” as they bid for victory over Austria in Dublin on Sunday.

Martin O’Neill’s men sit joint-top of 2018 World Cup qualifying Group D on 11 points alongside Serbia after five games. They are four clear of Sunday’s opponents Austria, thanks in no small part to McClean’s strike in a 1-0 win in Vienna back in November.

A repeat of that success at the Aviva Stadium on Sunday would strike a potentially decisive blow to Austria’s hopes of making the World Cup in Russia next summer and McClean is very keen to land that hit. Confidence is good after a 3-1 win over Uruguay in Dublin on Sunday, says the West Brom midfielder.

“We know what we have to do on Sunday and we’re looking forward to it,” McClean told RTE Sport. “Coming off the back of a game like that, you’re buoyed, you’re feeling well and you just want to go again straight away.

“We’ll prepare like the professionals we are, we’ll leave no stone unturned and we’re looking forward to it.” McClean came off the bench against Uruguay and quickly used his pace and power to score Ireland’s third goal, bursting clear of the defensive cover before blasting a low drive into the corner of the net.

It was remarkably similar to his winner in Vienna and the player would love to net again. “It’s nice to score goals, hopefully I can get one again next Sunday if I’m playing,” he added.

“It’d be brilliant to score next Sunday, that’s the one that matters.”