Eriksen admits to lure of Barcelona 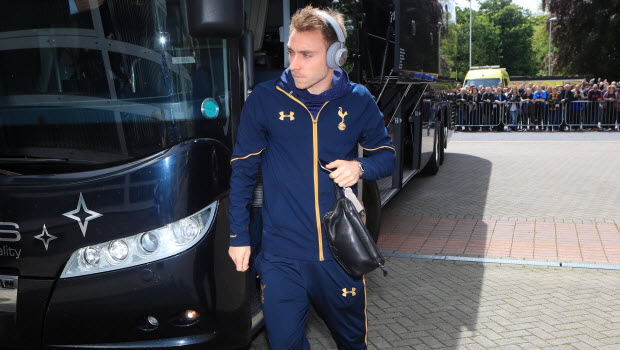 Tottenham midfielder Christian Eriksen admits that a potential move to Barcelona would be hard to turn down.

The Dane has been linked with a potential switch to the Nou Camp after starring for Spurs over the last couple of seasons. While admitting there has been no concrete approach for him by the La Liga club, Eriksen conceded it would be hard “to say no” if Barcelona did come in for him.

The playmaker wants to demonstrate his skills at the highest level possible and has no issue with admitting that may mean his long-term future is away from north London.

Eriksen, who had an unsuccessful trial with Barcelona as a youngster before joining Ajax, says few people would turn down the Spanish giants.

“I have been there [at Barcelona] at some point and it was not very good,” he told Danish newspaper Ekstra Bladet. “Barcelona are a great club and I do not think there are many who say no to Barcelona.”

Eriksen, who has now been at Tottenham for four years, scored 12 goals last term and provided 23 assists in all competitions as Spurs finished second in the Premier League table behind Chelsea.

He hopes that Mauricio Pochettino will lead Spurs to the top table although he also remains open to the idea of a move. “There is interest and there is definite interest.

Before there is concrete interest, I have no opinion on it. There are always rumours about footballers. I still have a contract with Tottenham a few more years,” he added.

“In the future I see myself at the highest level. That’s what I dream about. It can be about two to three years. It may be in another club or it could be Tottenham if we have come all the way up.”

Tottenham are 9.00 to win the Premier League next season.