Strachan urges Scots to ‘dig in’ for Auld Enemy clash 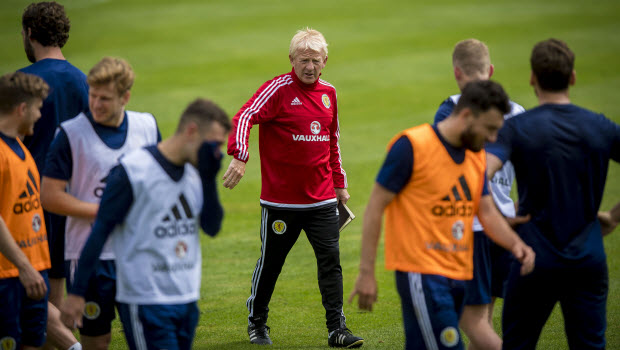 Boss Gordon Strachan says Scotland have got to work together as a team in order to attain a positive result from Saturday’s game against England at Hampden Park.

The Scots are already six points adrift of Group F leaders England having lost 3-0 at Wembley in November. Strachan’s side gained a vital 1-0 success over Slovenia in March, however, to retain their hopes of a place at next summer’s World Cup Finals in Russia.

Taking something from Gareth Southgate’s table toppers on Saturday in Glasgow would be another step in the right direction and Strachan has urged his players to work hard if they want to get it.

The Scotland boss was part of the last Scotland side to beat the Auld Enemy at the National Stadium, when a Richard Gough header secured the Rous Cup win in 1985.

The ex-Aberdeen and Leeds United midfielder admitted that he personally did not play well in that game, and he says that is when it becomes important to work hard for your team-mates. “It was wet. I wasn’t very good. But we won.

Richard Gough scored,” he said of the 1985 win. “In fact, the ball was coming towards me and I thought, ‘Please head this as I am not having a good day here’.

“But I was on the winning side and when you are a footballer, there are days where, if you are not playing well, you dig in deep and try to be a good teammate.”

Hard work will be vital for the home side if they are to succeed, says Strachan. “That is what is going to happen on Saturday. There will be players feeling great about themselves, some who will be having a rough time, at that point you dig in deep and that’s all you can ask,” he added.