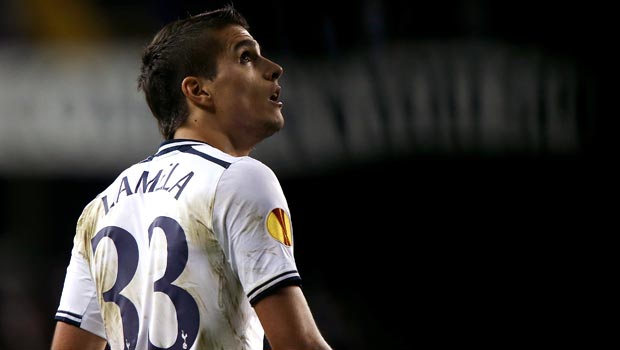 Tottenham manager Mauricio Pochettino insists club-record signing Erik Lamela has a big role to play next season after he netted a brace in Wednesday’s 3-2 friendly win over Toronto.

Lamela bagged a first-half double before returning winger Andros Townsend fired home a late winner to put an end to a spirited fightback from the MLS side.

The 22-year-old’s future at White Hart Lane has been unclear after he struggled to make any kind of an impression last season.

However, Pochettino believes that he can be key to helping the north London club find a way back into the Champions League if he fulfils his potential.

Pochettino said: “We expect a lot from him, he’s an unbelievable player.

“He needs to show us that he deserves to play, but at the moment we are happy with his performance.”

The former Roma man only started three Premier League games last term due to a string of injuries but he hopes that with a good pre-season behind him he can go on to feature heavily next season.

Lamela said: It’s something I would like [to carry my pre-season form into the upcoming campaign], but I have to continue to work.

“As the season progresses I will continue to get better.

“I felt like I was able to play a good 45 minutes. Overall I think the team did really well and I’m happy with the performance today.”

Spurs – priced at 12.00 to win the FA Cup – announced the signings of Michel Vorm and Ben Davies prior to kick off and Pochettino handed the Welsh full-back his debut.

“The season is very long and we need to stay deep at every position,” added the new Spurs manager.

“Ben Davies is important for us because he’s good competition for Danny Rose on the left side. He’s a young player, but he has good experience in the Premier League.”