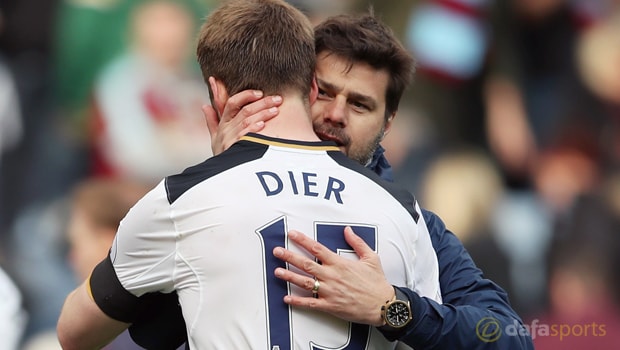 Mauricio Pochettino was delighted after his Tottenham side gained three points at Burnley to reduce Chelsea’s Premier League advantage to seven points.

It put some new life into the title race and the Spurs manager admits it was crucial to close the gap sooner rather than later on Chelsea.

“It was an unbelievable victory for us and it was important to reduce the gap on Chelsea after their defeat.

It was important for us to get the three points that we fully deserved in the end,” Pochettino told Sky Sports.

Having repeatedly stated that his side had to be ready to capitalise if Chelsea slipped up, Pochettino was elated to see them holding up their end of the bargain when the time arrived.

“I think we talk a lot about being there if Chelsea fail but what is important for us is the way we got the three points and the way we took the victory,” he added.

Spurs will hope they can further reduce the lead enjoyed by their London rivals on Wednesday.

They go to the Liberty Stadium to face Swansea City while Manchester City arrive in west London to do battle with Chelsea.

Just like Chelsea boss Antonio Conte stated after his side lost to Crystal Palace, Pochettino reiterated that no Premier League game is easy and he wants his players to recharge and focus on their trip to south Wales.

“But if we come with that energy and that predisposition to fight, I think we can compete.”