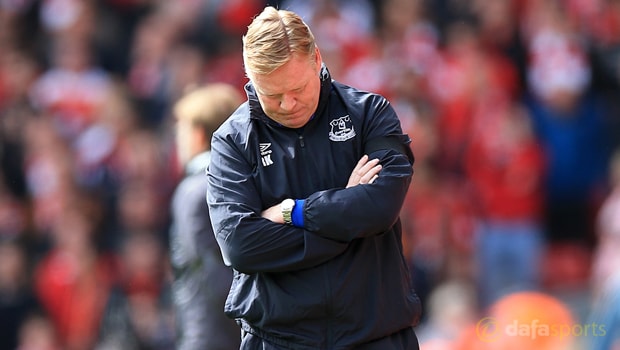 Everton boss Ronald Koeman took exception to some of the reactions of Liverpool manager Jurgen Klopp and his technical staff during Saturday’s 3-1 derby loss at Anfield.

Sadio Mane, Philippe Coutinho and Divock Origi all scored for the home side while Matthew Pennington briefly had Everton on level terms close to the half-hour mark.

There were some feisty challenges on both sides, with Toffees midfielder Ross Barkley perhaps fortunate to stay on the field after first-half altercations with James Milner, Emre Can and Dejan Lovren.

The Liverpool bench were animated at times in showing their disapproval for Barkley’s efforts, something that clearly drew the ire of Koeman afterwards.

“I don’t like coaches from the bench the whole time shouting to referees and to linesmen and to make a big show about tackles,” he told Sky Sports.

“It was one tackle and they were crazy, even though it didn’t need a physio on the pitch.”

The Dutchman went on to suggest that football is a man’s game and that the Liverpool bench should act in a manner more befitting that fact.

“It’s not what I like, it’s a man’s sport and your behaviour has to be like that. It’s part of football.

We don’t make a show like the Liverpool bench, we are different, we are into the game, and not about what happens with referees and linesmen and tackles,” he added.

Everton’s defeat means their winless run against Liverpool in the league was extended to 13 matches while they have still not won at Anfield since 1999.

The Toffees are 6.00 to win their next game away at Man United on Tuesday.