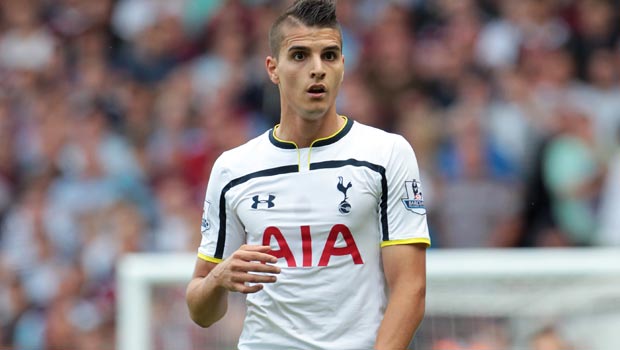 Mauricio Pochettino has backed Erik Lamela to shine for Tottenham this season after he inspired Spurs to victory against AEL Limassol in the Europa League.

Lamela had been written off as a flop in some quarters following a disappointing debut season, which was hit by injury, but he showed glimpses of his class on Thursday night.

Spurs were trailing Limassol 1-0 in Cyprus when Lamela entered the play with just 18 minutes remaining.

Within minutes Lamela set up Roberto Soldado for the equaliser and then laid on the winner for Harry Kane in the 80th minute as the comeback was completed.

Pochettino had nothing but praise for the 22-year-old and believes it is a sign of things to come.

“It is never easy in the first season for a player from another country,” Pochettino said. “It is true that it was difficult for him.

“He was injured, too, and we are confident with him that with time and hard work, like he has done in pre-season, that he can go far.

“He was very disappointed about last season but the past is the past.”

He added: “We need him to look forward, believe in his skill and condition and work very, very hard. With confidence and time he will show his value.

“You always nominate players on the bench who can have an impact and all three subs had an impact on the game.”

Spurs entertain Queens Park Rangers on Sunday and Lamela will be hoping he has done enough to secure a place in the starting XI.

Spurs are 1.45 to build on last weekend’s win at West Ham, by beating the R’s at Loftus Road.