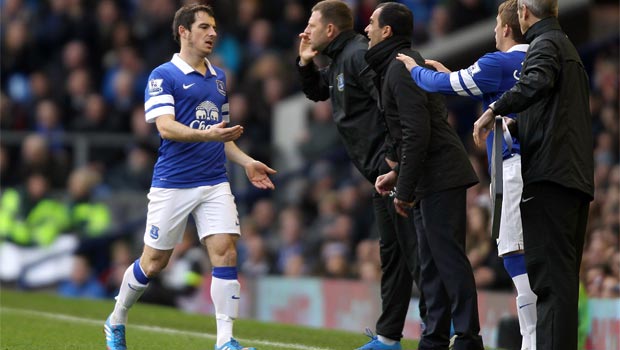 Everton left-back Leighton Baines may be the subject of plenty of interest when the January transfer window opens, but manager Roberto Martinez has reassured fans that he will not be going anywhere next month.

The England international was wanted by Manchester United over the summer and there has been strong suggestions that David Moyes will reignite his interest when the transfer window opens in three days’ time.

The Premier League champions had a number of bids turned down by the Toffees and Martinez has indicated that it will be the same story if United were to come calling again.

“In football you don’t work long term, you go window to window and I can guarantee that Leighton will be here at the end of the season,” said Martinez. “That is 100 per cent.

“That is how you work from window to window – to have a stronger squad than previously.

“Leighton is vital for us in the second half of the season. Bryan Oviedo has been terrific, but we need Leighton and Bryan fit for us, if we are going to fight for our football dream.”

Baines has been missing for the last six games due to a toe injury but is set to return to the side to face Southampton on Sunday.

This is not to say that Everton will not be selling next month as Nikica Jelavic could be heading out of the exit door as he has been the subject of interest from a couple of clubs.

The Croatia international is desperate to get more regular first-team action going into a World Cup year and would welcome a move away from Goodison Park as he has failed to nail down a starting spot under Martinez.

Martinez told evertontv: “We’ve had a couple of enquiries from two different clubs for one of our players.

“Nikica Jelavic is someone who we have made it very clear to – we’ve had a conversation and he has the World Cup around the corner.

“He needs to be playing minutes and we understand that. We’ll always try to give it a good assessment of the situation but that’s not affecting anyone at the club.

“Whatever happens in January will be for the good of the football club and that’s where the work is.”