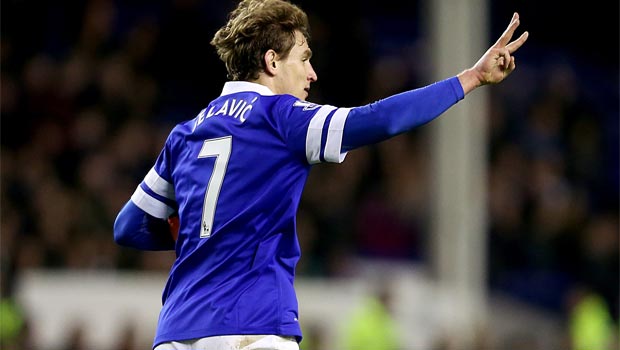 Roberto Martinez has stressed that striker Nikica Jelavic has a future at Everton but has admitted that he might not be at Goodison Park come the end of the January transfer window.

The Croatia international was given a rare start on Saturday – his first since September – and made full use of it as he scored twice to help the Blues ease through to the fourth round of the FA Cup.

He did waste the chance to make it a hat-trick as he saw his chipped penalty come back off the crossbar but it did not matter as Everton thumped Championship promotion hopefuls QPR 4-0 at Goodison.

Jelavic has been unable to oust Romelu Lukaku from the starting line-up and Martinez has conceded that he may have to let him go as he feels it would only be fair to the player in a World Cup year.

Martinez is reluctant to do so of course as he hopes to steer Everton into the Champions League places but it will depend on any offers that come in for the player.

“Put it this way – if the World Cup was not in the summer, this situation would never be in place.

“It (any move) will not be a loan situation. That wouldn’t allow us to replace Jela at all, so I don’t think that would be right for us. It has to work for the player, but more importantly, for us as a squad.

“The only possibility would be a permanent move that would allow us to bring another striker in, so we are able to be as strong as we are with Jela.”

QPR boss Harry Redknapp is reportedly an admirer of Jelavic and could well test Martinez’s resolve, although the Toffees’ boss has made it clear he will not be letting any of his players go on the cheap.