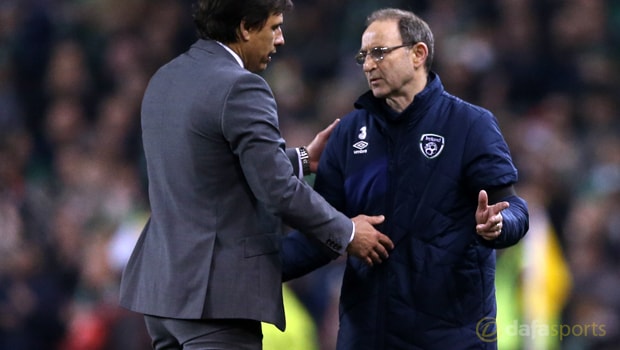 Martin O’Neill has labelled as ‘very poor’ the controversial tackles from Gareth Bale and Neil Taylor in the Republic of Ireland’s scoreless draw with Wales.

The 2018 World Cup qualifier in Dublin ended in stalemate and meant Ireland had maintained their four-point lead over Wales in Group D.

The game was overshadowed by a horrific double leg break suffered by Irish captain Seamus Coleman following a reckless challenge by Taylor.

The tackle arrived just seconds after Bale had caught John O’Shea with another dangerous lunge.

The Real Madrid star was perhaps fortunate to escape with a caution while Taylor saw a straight red card.

Both players are ruled out of Wales’ next qualifier in Serbia, while Taylor could yet face a hefty ban following a review by FIFA’s disciplinary committee of his tackle.

Reflecting on the game, the Ireland boss felt both challenges were ‘very poor’. “I’ve seen the challenge on Seamus [Coleman],” said O’Neill on Monday.

“I’ve seen the challenge on John [O’Shea]. They are very poor. “He [Coleman] was taken to hospital on Friday night. He was very groggy.

Naturally, he’s very disappointed. It will take some time to heal. “It’s a double break but it has been pinned up and screwed in place.

The doctors are very pleased with the way the operation has gone. Now, it’s time for recuperation.”

O’Neill is backing the Everton full-back to come back strongly from his injury setback.

“Seamus has great determination and sometimes things works very well in your favour in terms of recovery.

“He’s been phenomenal as captain of our team. It’s a big blow for the lad. At the minute, even doctors wouldn’t be sure [of a timescale for his return].

Sometimes there can be complications, other times it can be clear and it’s all plain sailing.”

Ireland are 2.15 to beat Iceland in their friendly clash in Dublin on Tuesday.