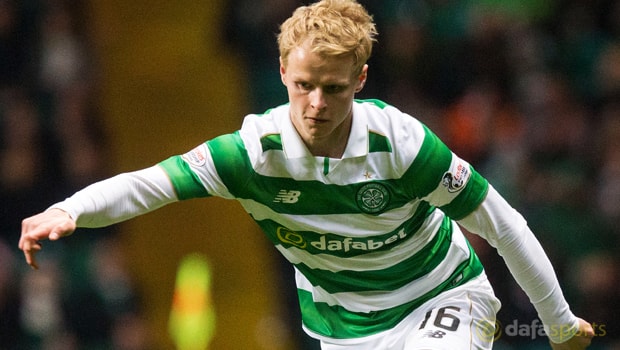 Celtic midfielder Gary Mackay-Steven remains committed to the Parkhead club despite his lack of game time this season.

The former Dundee United man has featured just nine times under Brendan Rodgers this season as the likes of Stuart Armstrong, Scott Sinclair and James Forrest have flourished ahead of him.

Celtic have marched relentlessly through the Scottish domestic season unbeaten and can wrap up their sixth title in a row by beating Hearts at Tynecastle this weekend.

While he has been forced to look on from the sidelines, Mackay-Steven is not ready to give up on his Celtic career just yet. “I just want to keep my head down and keep working,” he said.

“The manager hasn’t been anything other than great with me. He is always talking to us, always explaining what he is doing.

I have no issue with anything. “It is just up to me to show what I can in training and then take that into games whenever I get the chance.”

Mackay-Steven joined Celtic in January 2015 along with fellow midfielder Armstrong from Dundee United.

The pair are great pals off the field of play and Mackay-Steven is delighted to see his friend enjoying a stellar season.

Armstrong has netted 12 goals this term and he impressed in Scotland’s win over Slovenia on Sunday having been called into the starting team by Strachan.

“If anybody deserves it, it is Stuart,” Mackay-Steven added. “I know him well and I know how hard he works.

He is always at it, always trying to learn, to get better and you can see that this season the manager was prepared to give him his chance.

“He has taken it and I am not surprised at how well he has done because he we have always known what he has to offer. I am just delighted to watch him flourish the way he has this season.”