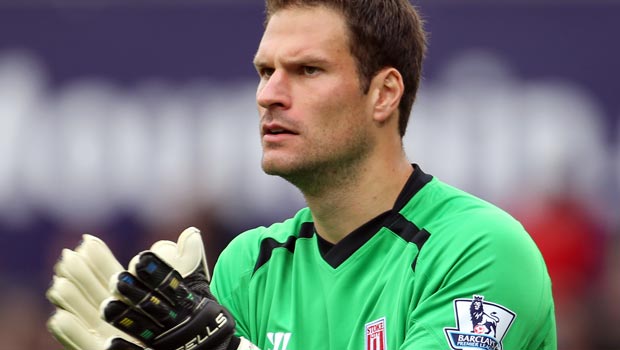 Stoke City manager Mark Hughes insists that highly-rated goalkeeper Asmir Begovic will not be leaving the club this summer unless one of the ‘top clubs in world football’ makes an enormous offer.

Begovic has been a member of the Potters set up since 2010 after agreeing a £3.25million switch from Portsmouth, after former boss Tony Pulis admitted he was a huge admirer.

The Bosnia international played second fiddle to Thomas Sorenson after joining midway through the 2009-10 season but Pulis rewarded him with the number one jersey at the beginning of the next term.

The 27-year-old has established himself as one of the most consistent and reliable stoppers in the English top-flight.

Arsenal, Manchester United and Manchester City have all expressed an interest in his services but Stoke, who are priced at 9.00 to be relegated, have yet to receive a formal approach from anyone.

Hughes, who took charge at the Britannia Stadium in May 2013, insists that Begovic is expected to be part of the squad when the transfer window slams shut at 11pm on September 1.

Hughes said: “We don’t anticipate any movement from our point of view, it’s not a discussion to be had. He’ll be here and he’ll be our keeper.

“That’s how I want to remain to be honest. Our view is that even if something is presented to us, we wouldn’t take it anyway at this stage because we’re comfortable with the group that we’ve got.

“It’s hands off if anyone comes in. There’s only a certain level he’d be able to go to.

“His next move won’t be a sideways move to a club on the same level. It’d be to one of the top clubs in World football.”