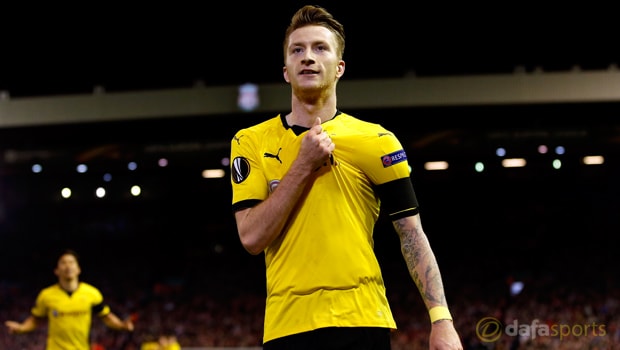 Marco Reus has warned Borussia Dortmund that they must defend better if they are to have any designs on winning the Champions League.

Der BVB met Real Madrid on Wednesday with Los Blancos knowing that a victory would give them top spot in Group F and Dortmund’s slack defensive work helped the holders to a 2-0 advantage.

Dortmund struck back through Pierre-Emerick Aubameyang and it was Reus who was the hero, netting in the 89th minute to hand his side a 2-2 draw.

As a result, Thomas Tuchel’s men, who are 13.00 to win the competition, go through as the top seeds from the pool and will now be hoping for a favourable draw in the last 16.

Reus’ strike also meant that Dortmund’s tally of 21 group stage goals saw them break the all-time Champions League record, but it is at the other end where the skipper was most concerned by their performance.

When asked about the benchmark, the 27-year-old admitted he was pleased with their attacking prowess but says his side must improve defensively if they are to have any chance of conquering Europe.

He told the club’s official website: “It’s nice, of course, especially because this is the Champions League, where every opponent is strong.

But it goes without saying that we also really need to try to defend better as a team because we have conceded too many goals in our last few games.

“Ultimately we haven’t really been made to suffer for it because we’ve scored so many at the other end, but we do need to try to defend better.”

Saturday sees Borussia travel to Cologne for a game they are 1.62 to win, with the draw 4.20 and Die Geissbocke 5.25.