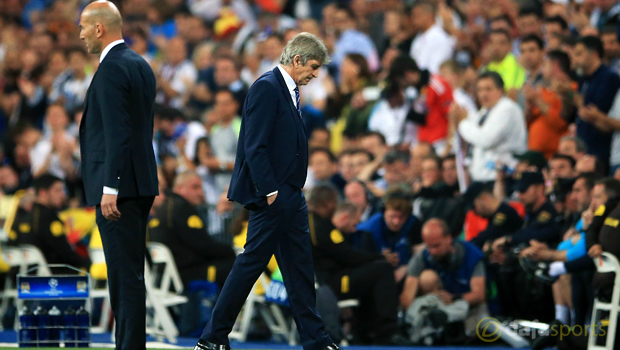 Manchester City’s dream of appearing in a first Champions League final ended at the hands of Real Madrid, with City boss Manuel Pellegrini insisting luck, rather than skill, had paid off for his former employers.

The Premier League side were eliminated by a solitary goal over two legs, with Gareth Bale’s cross deflected past Joe Hart off Fernando during the first half in the Spanish capital.

City offered up a disjointed and often toothless display in the Bernabeu, with most observers contending that Pellegrini’s team had not done enough to merit progression.

The closest they came was when Sergio Aguero rattled a late shot inches over the crossbar.

However, Pellegrini – who will be replaced by Pep Guardiola this summer – felt that neither side was worthy of the win and that a penalty shootout would have been a fair outcome.

“We didn’t deserve to lose this game,” he said. “Real were very lucky with the deflection that gave them the goal.

“None of the teams deserved to win and it should have gone to penalties. We didn’t see Real Madrid better than us, we were not creative enough to do damage.

“Fernandinho had City’s best chance in the opening half, dragging a shot just past the near post from the edge of the box.

Real had 15 attempts on Hart’s goal, compared to just four from City at the other end, but Pellegrini felt both teams lacked the overall quality required in the final third. “I think it was very similar to the first leg with not many chances created, the team was working, but not with really anybody making a difference,” he added.

“We were not very creative, we had one clear chance with Fernandinho, another with Kun (Sergio Aguero), but not much – it was the same with Real Madrid, they did not create many chances also.”

Real Madrid are 1.73 to win the Champions League final. They will face city rivals Atletico in Milan, with Diego Simeone’s team 2.10 to lift the trophy.