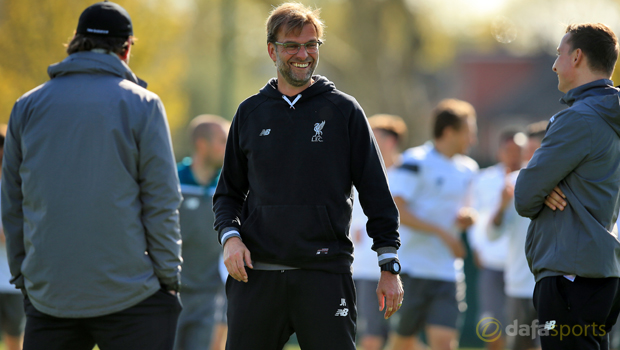 Liverpool manager Jurgen Klopp says reaching the Europa League final would give the club a massive opportunity to end a poor season on a high note.

The Reds face Villarreal at Anfield in their semi-final second leg trailing by a solitary goal after last week’s tussle in Spain.

Then, Liverpool had dictated matters for much of the evening, but the La Liga outfit grabbed a crucial advantage in stoppage time through sub Adrian Lopez.

Klopp has reminded his players that the tie has only reached half-time and he says the must display both patience and purpose at Anfield if they want to book a slot in the final in Basel. “We know we have 90-something minutes.

“It’s about playing football. Most of the time football is a fair game. This game is a big opportunity in a difficult season for Liverpool.

” Klopp added that even when Villarreal snatched their last-gasp victory at El Madrigal in the first leg, he remained calm, knowing that Liverpool would have the chance to repair that damage in front of a full house on home soil.

He says nothing has changed in that regard and that he goes into the second leg full of hope.

“The only thing I thought in this moment was ‘half-time’. Nothing happened.

They have to come to Anfield,” he said. “I am still feeling this so the feeling is we are halfway through and I know how difficult it is.

I sense the chance more than I am afraid of something – so let’s try.

“Liverpool are 1.67 to defeat Villarreal at Anfield, while the Reds are 3.50 to win the Europa League this season.