Mancini laments wasting of chances as Italy records another draw

Posted by OLADIPUPO MOJEED on September 6, 2021 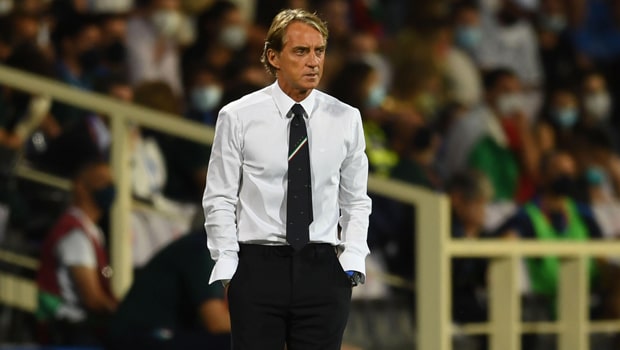 European champions Italy have suffered another blow in their 2022 World Cup quest after being held to a goalless draw by Switzerland.

Their regular penalty taker, Jorghino, had an opportunity to secure maximum points for the Azurris. Lamenting over the situation after the match, coach Roberto Mancini pointed out their second consecutive stalemate. He said what made them not win despite creating many scoring opportunities leaves him irritated.

Italy was held to a dogged defending from Bulgaria in Florence on Thursday. Chances of the Azzurri came to the ways of Domenico Berardi and Ciro Immobile, notably missing sitters,  but they failed to put the ball at the back of the net.

The high point of it was the save of Jorginho’s penalty saved by Yann Sommer.

Speaking with RAI, the former Manchester City manager admitted that it was a moment when the ball just isn’t going in.

Not looking at the penalty miss, Mancini said his men need to be more determined, clinical, and precise to win games.

Citing an example of Bulgaria that held the winners, Mancini said their hosts made things worst for them in the second half.  Despite that, Italy had chances to score, thereby criticising their play.

Considering this result, their meeting in November in Italy means a battle for who will top the table.

According to the FIFA rule, only the top team advances automatically to the group stage of the 2022 World Cup, while the runner-up enters the play-offs.

Despite the results, the Swiss are still four points behind Les Bleus.

Admitting that some of the players are tired, Mancini admitted that there would be changes in the third qualifier against Lithuania.

Italy will be hoping to return to winning ways to consolidate its position on the log.