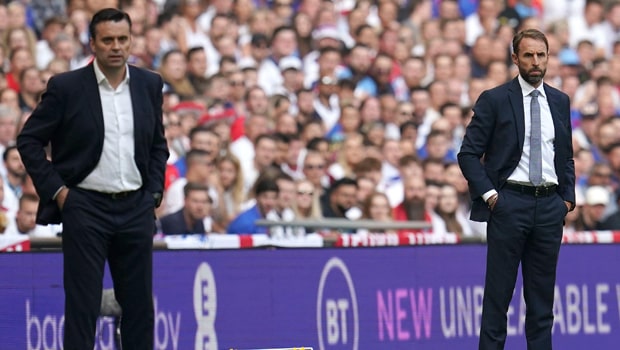 England for the second game in a row scored four to dispatch their 2022 FIFA World Cup Qualifiers opponents after beating Andorra with Four second half goals on Sunday.

The three Lions, despite an hostile crowd in Budapest, defeated Hungary 4-0 on Thursday with all goals coming fron the second half of the game that was marred by racist chants.

However, the Euro2020 finalists were comfortable at the Wembley but found the Andorrans difficult to break down despite Jesse Lingard’s first half goal.

The Manchester United forward was returning to the team after he was dropped by Gareth Southgate from the Euro 2020 squad.

The starting 11 also had some fringe players in it with West Brom’s Sam Johnstone in goal while Wolves defender Conor Coady made his England debut.

There was also a debut for Leeds United forward Patrick Bamford who spearheaded the attack alongside Lingard and Bukayo Sala and Dortmund midfielder Jude Bellingham started in midfield.

After Lingard’s first half goal, England’s second goal came in the 72nd minute when substitute Harry Kane scored from the spot.

Lingard scored his second three minutes later while Arsenal midfielder Saka rounded up the goals with 8 minutes left. England will face Poland next on Wednesday.

Meanwhile, in Belarus Gareth Bale was the hero for the Welsh team as they overcame a stubborn Belarus team in the final minutes.

Bale gave the Welsh the lead from the penalty spot in the fifth minute but quick fire goals in two first half minutes the home side in the lead before half time.

Bale scored in 69th minute before another penalty in the final minute ensured the win for Wales.

Meanwhile, Romelu Lukaku scored on his 100th appearance for Belgium as they beat Czech Republic with Real Madrid and former Chelsea forward Hazard getting on the scoresheet.