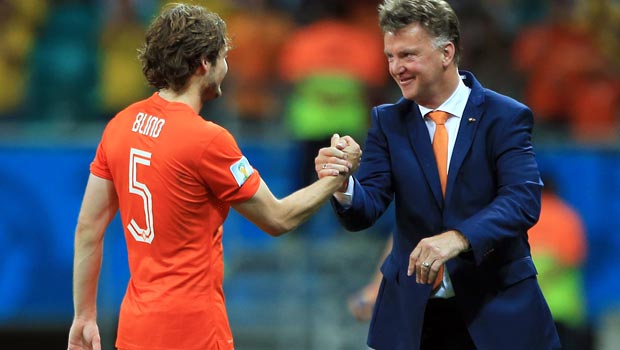 Louis van Gaal is still waiting for his first win as Manchester United boss but continues to reshape his squad after agreeing a fee with Ajax for versatile defender Daley Blind.

Having sealed a British record deal for Angel di Maria last week, United are closing in on a move for Netherlands international Blind, who van Gaal knows very well having coached him at the recent World Cup.

Van Gaal decided to give the squad he inherited at Old Trafford a chance to prove themselves, but he seems to have decided reinforcements are needed after a disappointing start to the campaign.

An opening day defeat to Swansea at Old Trafford was followed by a disappointing 1-1 draw with Sunderland before a much-changed side was hammered 4-0 by MK Dons in the Capital One Cup.

Di Maria was given his debut on Saturday but failed to inspire the side to their first victory as Burnley held United to a goalless draw.

Should Blind complete a move to Old Trafford, his fee of £13.8m will take United’s spending close to £160m, with the very distinct possibility of more to come with the transfer deadline fast approaching.

Nigel de Jong – another member of van Gaal’s Netherlands World Cup squad – continues to be linked with a return to the Premier League, while talk of a swoop for Juventus midfield general Arturo Vidal is unlikely to stop until the window slams shut.

Former Chelsea defender Ricardo Carvalho is the latest name to be linked with a move, while there could be a number of departures in what is set to be a busy day at Old Trafford on Monday.

Shinji Kagawa is closing in on a return to Borussia Dortmund having struggled to settle in Manchester, while England internationals Tom Cleverley and Danny Welbeck, as well as striker Javier Hernandez, are thought to be surplus to requirements.