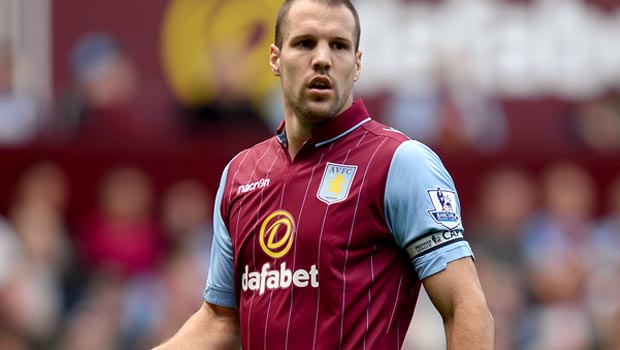 According to reports in English media, Manchester United are preparing a swoop for Aston Villa defender Ron Vlaar.

The Red Devils’ manager Louis Van Gaal worked with the centre-back closely during the Netherlands’ World Cup campaign over the summer, and the 29-year-old is reportedly considering his options.

Vlaar’s current contract at Villa Park expires next summer, and so clubs will be allowed to talk to Villa’s captain in January with a view to a free transfer at the end of the season.

Manchester United’s defensive problems have come under much scrutiny in recent times, with many fans believing that despite the 20-time league champions’ spending spree in the summer, their defensive crisis has not yet been properly addressed.

Centre-backs Rio Ferdinand and Nemanja Vidic both left the club in the summer, with no direct replacements arriving, with Van Gaal’s cause not helped by the fact Phil Jones, Jonny Evans and Chris Smalling have all suffered with injury this term.

United have endured a mixed start to the 2014/15 season, having lost twice, drawn twice and won three times.

The red side of Manchester will also be concerned of reports coming in the Spanish media that European champions Real Madrid are lining up a bid for United keeper David de Gea.

The former Atletico Madrid stopper recently made his first start for the senior Spain side in their Euro 2016 qualifying win over Luxembourg, replacing Iker Casillas after the captain made several mistakes in the shock defeat to Slovakia.

Should Spanish giants Real make a move for United’s number one, then it is likely that fans will see him replace Casillas for both club and country.

Manchester United next face West Brom at the Hawthorns on Monday October 20, and are installed as 1.72 favourites to win.