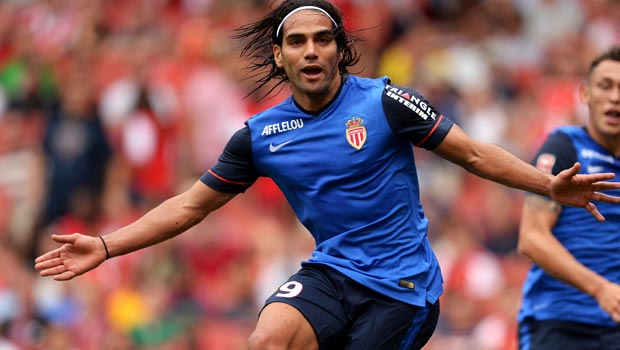 The Colombian international looked set for a move after being left out of Monaco’s Ligue 1 clash against Lille on Saturday, but few expected Old Trafford to be his destination.

The striker must pass a medical before completing the move but it appears as though Louis van Gaal has landed one of the deals of the window in front of the noses of Manchester City, Real Madrid and Arsenal.

Falcao has only been at Monaco for one season after leaving Atletico Madrid for £50million in May 2013.

He scored 11 goals in 20 appearances for the French outfit but then injured knee ligaments and as a result missed the World Cup in Brazil.

Real Madrid appeared to be the front runners for the deal after they sold Angel di Maria to United last week. Rumours continued to spread when Falcao reportedly tweeted about the move but the forward claimed it was a fake photo doing the rounds.

City then joined the race after Falcao was left out of the Monaco squad at the weekend, despite starting last week’s game against Nantes.

Ajax defender Daley Blind is also set to join the English giants after the two clubs agreed a £13.8million fee for the Netherlands man.

Real Madrid have still bolstered their attacking options as they have secured a season-long loan deal for United striker Javier Hernandez.