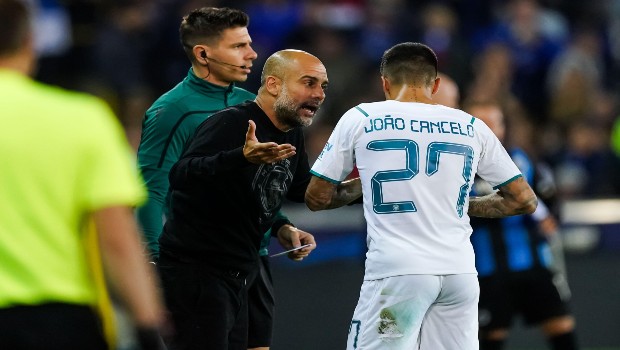 Manchester City made light work of Belgian side Club Brugge in a 5-1 victory on Tuesday evening.

The Citizens returned to winning ways in the UEFA Champions League after losing their last game against PSG on matchday two.

Pep Guardiola side didn’t start the goals early until the 30th minute when Joao Cancelo opened the scoring before Riyadh Mahrez made it two from the penalty spot with two minutes from the break.

The rout continued with Kyle Walker in the 53rd minute of the game after the break before substitute Cole Palmer made it 4 in the 63rd minute.

Belgian midfielder Hans Vanaken scored a consolation goal in the 81st minute but Mahrez got in brace three minutes to retain the four-goal deficit.

It’s a morale booster for Pep Guardiola’s side who go into three domestic fixtures against Brighton in the Premier League at the weekend, followed by a midweek fixture against West Ham United and a Premier League game against Crystal Palace.

Their next UEFA Champions League game will be a return leg against the Belgians on the third of November.
City are second in Group A with 6 points, one behind group leaders PSG who top with 7 points after beating RB Leipzig 3-2 at the Parc De Princes.

The Egyptian thought he had scored the opener in the 8th minute but his effort was deflected in via James Milner.

Naby Keita made it two five minutes before Antoine Griezmann scored a brace in the 20th and 34th minute of the game to level the game going into the break.

The French forward was sent off early in the second half as Salah scored the winner from the spot in the 76th minute.

On Wednesday, Chelsea will host Swedish side Malmo while Manchester United will welcome Atalanta.