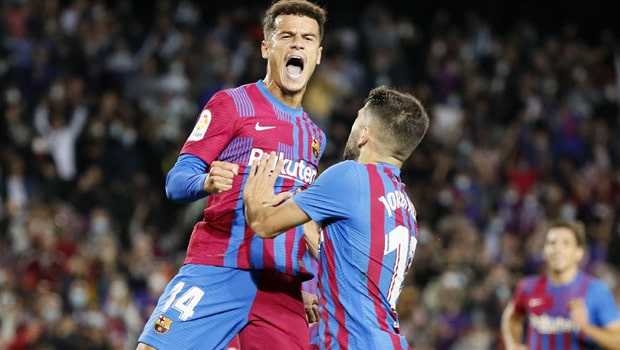 Philippe Coutinho came off the bench and ended his 11-month goal drought by scoring for FC Barcelona in a 3-1 win over Valencia. After the win, Barca manager Ronald Koeman was full of praises for the Brazilian attacking midfielder. The Dutchman revealed that he always believed in Countinho’s abilities and feels that the Brazilian maestro can take up a bigger role at Camp Nou with more consistent performances.

This was Coutinho’s first goal since late 2020 as he was out of favour for many months. However, now he has earned Koeman’s trust and will be looking to get back to the starting lineup for the Cules.

Speaking on Coutinho’s performances against Valencia, Koeman told the reporters, “It was good. When he entered the game he was good. With his freedom, we were able to control the game better. He knows how to score goals. He has taken an important step because I have always believed in Coutinho. Physically, he is getting better and better.”

There was some talk about Barcelona’s second goal that Memphis Depay scored from the spot after Ansu Fati was brought down in the penalty area. “You can doubt whether it is a penalty or not,” Koeman added. “The referee has whistled, the VAR has not entered and, therefore, it is a penalty.”

Ansu Fati, who started for FC Barcelona after a long injury layoff made a difference for Blaugrana in a very crucial win against Valencia. Apart from Coutinho and Fati, another player made who made his debut for Barcelona was Sergio Aguero. The former Manchester City legend who joined the Spanish outfit this summer finally made his debut after coming off from hen bench.

Speaking about Sergio Aguero, Koeman also addressed the issue regarding Ansu Fati. The Dutchman praised the youngster and explained how he will gradually play more minutes and get physically better.

“He (Ansu Fati) is an important player for his quality and experience. We want to give him minutes and he will be physically better to help the team. It is not a quality issue, but a fitness issue.”

Barcelona and Koeman were under a lot of pressure after a string of poor results. But now with two wins in three matches, the pressure is a little off their shoulders. However, Barcelona will look to improve their performances as the season has just started. The Blaugrana will now play Dynamo Kyiv in the Champions League as they gear up for the high voltage El Clasico clash against Real Madrid this Saturday.