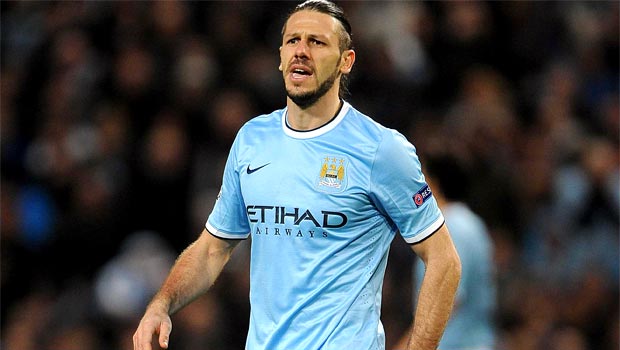 The defender came in for some heavy criticism following his performance against Barcelona in midweek when he conceded a penalty and was subsequently sent off during the 2-0 defeat.

The Argentina ace also struggled during the Premier League defeat against Chelsea at the Etihad Stadium and Watford in the FA Cup, but Pellegrini is standing by his man.

Demichelis has been Vincent Kompany’s regular partner in the heart of the City defence and Pellegrini insists that will continue.

“I think he is a very important player,” said Pellegrini. “He is in a very good performance for the moment.

“I think Vincent Kompany and him are playing well so he is a very useful player for us.”

The situation may change when Matija Nastasic returns from a knee injury but for now he will continue to play as there are no signs of Joleon Lescott ousting him.

Pellegrini has also revealed Porto’s Eliaquim Mangala was a target ahead of the transfer deadline but has no regrets about not pursuing a deal as he believes he has enough cover.

“No, I don’t regret it. One of the reasons we thought about that was because Joleon Lescott wanted to go, but Lescott is (still) here and with Demichelis, Nastasic and Kompany we have enough for the position,” he added.

Demichelis will start against Stoke City at the Etihad Stadium on Saturday afternoon, where Pellegrini’s men are 1.15 to win, with the Potters massive 18.09 outsiders.