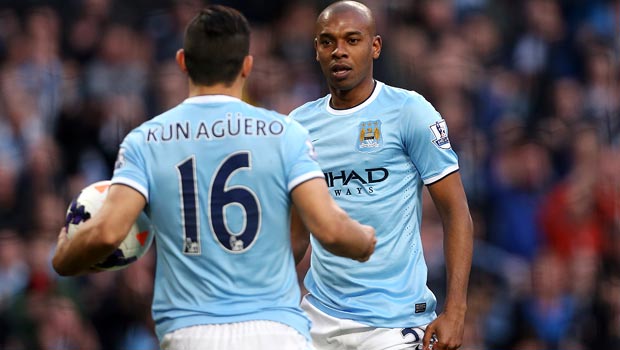 Fernandinho claims Manchester City will not let the destiny of the Premier League title slip from their control a second time but admits they will need to be at their best to stay on track at Everton.

The Citizens regained the adventure in the fight for the title last weekend when Liverpool were beaten at home by Chelsea, while Manuel Pellegrini’s men took all three points from their trip to Crystal Palace.

City could now go back to the top of the league with a win at Everton on Saturday and know the championship will be theirs if they can take maximum points from their three remaining matches.

Pellegrini’s side’s position is in stark contrast to where they found themselves just three weeks ago when defeat to Liverpool and a draw at home to Sunderland gave the Reds control of the title race.

City are now the favourites to win a second Premier League crown in three years at 1.70, while Liverpool are 2.13 and Chelsea 16.00.

Fernandinho says it’s a huge relief to no longer have to rely on other teams and says City have been revitalised after wrestling control back from Liverpool.

“We are back with a big chance of being champions again,” said Fernandinho. “We are not depending on other teams. It only depends on us, and that has changed a lot.

“It gives you energy as mentality is 70 per cent of your body, and a result like that changes everything – your mind, your motivation, everything. When your head is good, your body is good as well.”

City will look to keep their title push on tract at Everton this weekend in what is arguable their toughest remaining match before the season draws to a close.

With home games against Aston Villa and West Ham to come, Fernandinho admits victory at Goodison Park will leave City in a very strong position.
“It’s a massive game for both teams,” added Fernandinho “We are trying to keep fighting for the title and need to play to win the game, which hopefully we can do.

“We will need to play our best football, in the way we have played for the last month. We cannot change, we have our style and we don’t need to change, whether we are at home or away.

“We have waited a long time for this moment, and the positivity of the whole group is now very high. We will get better and better until the last game.”