Manchester City must never give up, says Manuel Pellegrini 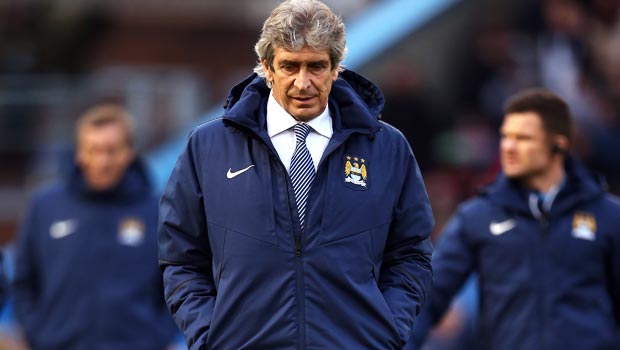 Manchester City manager Manuel Pellegrini says the race for the Premier League title is still on and the Chilean has demanded focus from his side for the remaining nine games.

The Citizens were knocked out of the Champions League on Wednesday night at the hands of Barcelona and the defeat means there are no English clubs left in the tournament, with Chelsea and Arsenal having both also exited.

The Catalans won 1-0 at the Camp Nou – and 3-1 on aggregate – but the margin could have been a lot more if it were not for goalkeeper Joe Hart as the England international made a string of superb saves.

City’s defeat comes just four days after their shock loss to relegation-threatened Burnley which has left their Premier League title defence in the balance.

Chelsea are six points clear at the top of the table and have a game in hand on their rivals as well, leaving Jose Mourinho’s men in a dominant position.

City look destined to end the season with no silverware and that could spell the end for Pellegrini whose position as manager is under serious threat.

Napoli boss Rafa Benitez has already been touted as a possible replacement and the former Liverpool head coach could be brought in this summer.

But Pellegrini is still fighting hard and has called for a response from his side when they host West Brom on Saturday.

“We are second in league, need to consolidate our position and see where we are over (the last) nine games,” he said. “We must never give up.

“We are six points behind Chelsea, so it is difficult, but we still have nine games left. We must focus our minds. It is a disappointment not to go through (in the Champions League) but we have just played the best team in the world.”

City are 14.00 to win the Premier League this season while Chelsea are favourites at 1.09 to add a second trophy to the cabinet, having already lifted the League Cup this season.