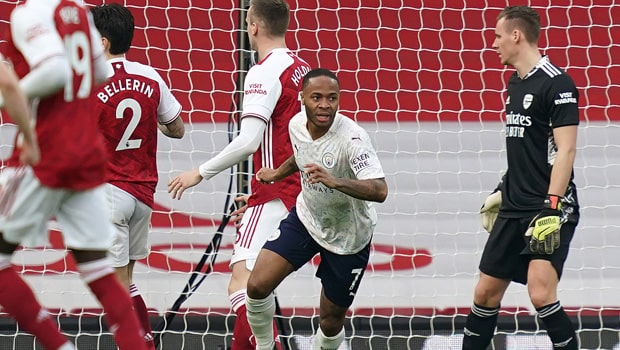 A Raheem Sterling’s first-half goal was all Manchester City needed to continue their impressive winning run in the Premier League.

Pep Guardiola’s side traveled to the Emirates Stadium on Sunday to face an inconsistent Arsenal side in a bid to extend their winning run to 18 matches in the Premier League.

That was exactly what they did as they got into the lead as early as the 2nd minute of the game when Raheem Sterling headed home Riyad Mahrez cross.

Pep Guardiola’s side was dominant in the first half as Arsenal struggled to settle into the match. However, neither side could add to the scoreline but City had done enough to get all three points.

“I’m surprised and impressed and so when everyone is suffering in this world, all the teams in the league are dropping points, we were consistent over the past two months and I did not expect [that]. People talk and talk about the record and the victories but to do this you have to win these types of games many, many times.” Guardiola said.

Manchester City hasn’t dropped a point in the Premier League since December 15 and now have ten points ahead of second-placed Manchester United.

Pep Guardiola’s side will now shift their sights to the UEFA Champions League Round of 16 first-leg clash against Borrusia Monchengladbach in Germany on Wednesday.

Leicester City also won 2-1 at Villa Park against Aston Villa as James Maddison and Harvey Barnes put the Foxes ahead in the first half while Bertrand Traore got the consolation for the home side three minutes after half time.