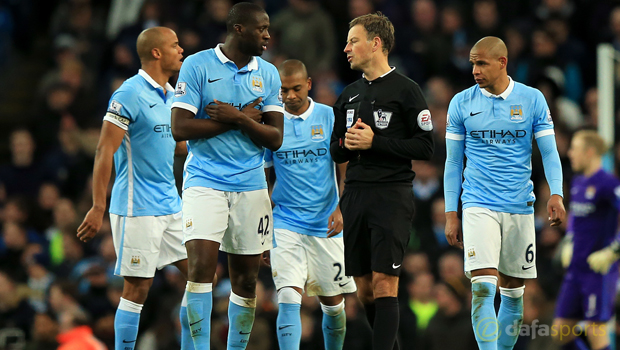 Manchester City captain Vincent Kompany says it would be foolish to write-off their chances of winning the Premier League as he believes history can repeat itself.

The Citizens are now 7.00 to win the title after suffering back-to-back home defeats to rivals Leicester and Tottenham.

Sunday’s 2-1 reverse against Spurs leaves City six points behind leaders Leicester with 12 games to go and Kompany admits improvements must be made if they are to be crowned champions for the third time in five seasons.

The Belgium international is adamant City will keep on fighting until the end as he draws on past experiences, with the Etihad Stadium outfit having overturned an eight-point deficit to beat Manchester United to the title on goal difference in the 2010-11 season.

“There is not a chance we will give up on the title. We have to improve,” Kompany told BBC Sport.

“We probably could have played a little bit better (against Spurs). Until the penalty, the game plan was OK and we were defending well. But we would be stupid to forget our history and how we react in those moments.”

Kompany’s return after six weeks out injured was the only positive City could take from the loss to Spurs.

Harry Kane gave the visitors the lead from the penalty spot following a contentious handball decision involving Raheem Sterling before City managed to level through Kelechi Iheanacho, but Christian Eriksen struck the winner in the final 10 minutes to secure Spurs all three points.

Blues boss Manuel Pellegrini was left fuming with referee Mark Clattenburg’s decision to award Tottenham a penalty, given replays showed Danny Rose’s cross hit the back of Sterling, with the Chilean insisting the incident decided the outcome.

“It was the key moment that decided the game,” Pellegrini said. “It was the same referee in the first game where there were two clear goals in offside positions and we lost 4-1.

“We are going to continue fighting until the end. We still have 36 points to play for and are only six points behind the leaders. We will not give up and continue working and improving.”