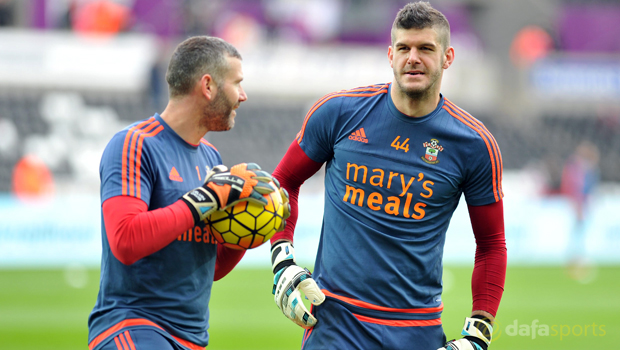 Southampton’s Fraser Forster has received the support of team-mate Oriel Romeu and Swansea midfielder Jack Cork in his bid to be selected for England’s Euro 2016 squad.

The shot stopper has impressed since returning from 10 months on the sidelines with a serious knee injury last month, keeping six successive clean sheets in the Premier League.

Forster’s return has proved to be the catalyst for an improvement in fortunes for his club side, the Saints shooting up the league ladder and into sixth on the back of his shut outs.

Forster’s latest clean sheet came in the narrow 1-0 victory over Swansea on Saturday, after which England head coach Roy Hodgson claimed that the Southampton star’s return had made the Three Lions as strong as they ever have been in the goalkeeping department.

Manchester City’s Joe Hart is Hodgson’s No.1 choice, with Forster set to battle it out with Stoke gloveman Jack Butland to be England’s back-up should he make the squad for Euro 2016.

Romeu claims it would be foolish not to take Forster as he believes he is one of the top goalkeepers in Europe.

Cork, who knows Forster well from his time at Southampton, has also been impressed with his former team-mate, claiming he is showing no side effects from his long lay-off.

“They were tipping Fraser to be England No. 1 when he was fully fit, then he had that awful injury. It was terrible. But you can see that his class has stayed with him,” Cork said. “If you can look at his form before the injury and now there is no reason why he shouldn’t go.”

Forster will hope to be involved when England kick-off their Euro 2016 campaign against Russia on June 11. The Three Lions are the 2.20 favourites to win the game, with the Russians priced at 3.10 and the draw at 3.10.