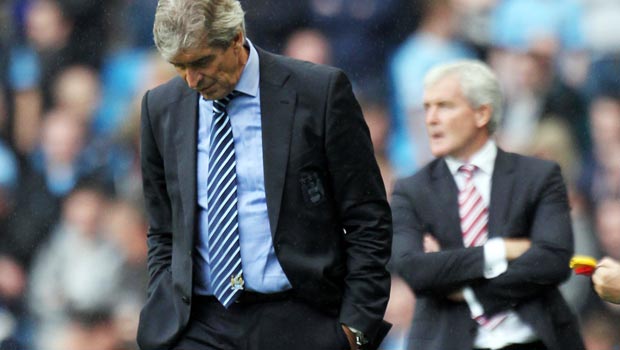 Manchester City boss Manuel Pellegrini admitted his side has made a disappointing start to the campaign, but insists Saturday’s shock 1-0 defeat to Stoke City is a one-off.

Although perhaps not at their best, the champions had won their opening two fixtures of the Premier League season, which included a 3-1 success over last year’s runners-up Liverpool at the Etihad after having beaten Newcastle on the opening weekend.

However, they struggled to get going against the Potters on Saturday and fell to a superb solo goal from Mame Biram Diouf just before the hour.

The former Manchester United striker was allowed to run from just outside his own box through to the City area before rifling past Joe Hart at his near post, although the keeper may feel he should have done better.

It was certainly not the start to the campaign that Pellegrini was looking for, having lost just once at home all season last term, but he will not be making any knee-jerk reactions following the setback, with his side now priced at 3.80 to retain their title.

“It is always serious to lose three points at home,” he said. “It was very important for our team to try and win nine points before the international break.

“It is not good to start this break with a defeat, but these types of game happen once a year and it has happened to our team. We will continue playing and working the same way we are doing now. Exactly the same.”

Rather than point any finger of blame at England keeper Hart, Pellegrini appeared more concerned with the lack of creative flair on the day with City firing a blank for only the second time in 71 home Premier League matches.

“I analyse as a team and, as a team, they all could have done more,” Pellegrini said. “We couldn’t create space and had a bad day in our creative play.”