Jose Mourinho closing in on back-up for ‘complete’ Diego Costa 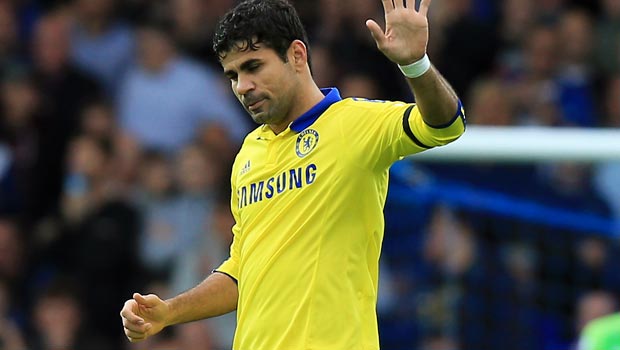 Chelsea boss Jose Mourinho is closing in on a move for striker Loic Remy despite witnessing what he described as a ‘complete performance’ from Diego Costa that helped maintain the club’s 100 percent start to the season.

Costa was brought in over the summer as Chelsea looked to add firepower to their ranks after misfiring frontline arguably cost them a chance of Premier League glory last term.

The Brazilian-born Spain international has made an instant impact in England, scoring in all three Premier League games so far with his brace on Saturday securing all three points in a 6-3 win over Everton at Goodison Park.

Mourinho couldn’t hide his delight at the performance of his star man, who has climbed to the top of the goal-scoring charts with four goals in three games.

“It was the complete performance of a striker,” Mourinho said. “The perfect performance in every aspect.

“In the first half he was tackling, he recovers balls, he holds the ball, and his movement was quality. Everything was really good.

“Diego had three chances and he scored two goals. He is a good finisher and he gives us a lot. In the end we are killers in attack.”

Mourinho is still trying to add to his forward line following the departure of Fernando Torres on a two-year loan to AC Milan, with Remy his target before the transfer window slams shut.

A move to Liverpool for the France international looked on the cards until he failed a medical, but Mourinho is adamant that there are no problems fitness-wise.

He said: “We are trying to get Remy. The information we have from specialists in different areas is that he doesn’t have a problem to play football.”

Although QPR boss Harry Redknapp has said that a move to Chelsea is ‘probably done’, Arsenal are reportedly looking to hijack the deal in the wake of the long-term injury to Olivier Giroud and it is claimed they have also triggered the striker’s release clause at Loftus Road.