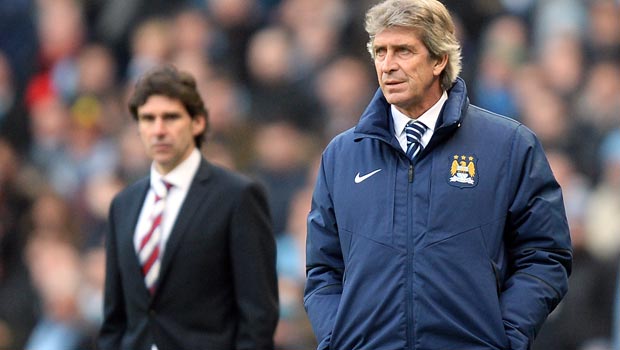 Manchester City boss Manuel Pellegrini has defended his strikers after his side failed to score in a 2-0 FA Cup defeat at home to Middlesbrough on Saturday.

The defending Premier League champions were dumped out of the FA Cup in the fourth round by Championship promotion hopefuls Boro.

Sergio Aguero completed the full 90 minutes, Stevan Jovetic started and was replaced on 67 minutes and Edin Dzeko made a late appearance from the bench.

City’s expensively-assembled attacking line-up may have failed to find the target, but Pellegrini has moved to defend the trio, who have all recently returned from injury.

“I think the problem is that we had to change our style of play because we didn’t have the strikers for around a month – after that the strikers come back but of course they need time maybe to have their best performance and we have to retain the way we normally play so we need some time,” said the City boss.

City face a huge test next weekend as they travel to Premier League leaders Chelsea, who also suffered cup heartache as they were dumped out by League One Bradford.

Defeat for Pellegrini’s side would put a huge dint in their title defence as Chelsea would open up an eight-point lead and the manager admits he is concerned by his side’s struggles in front of goal.

He added: “I am concerned about it (City’s recent lack of goals) but not because of the Chelsea game, I am concerned because in the last two home games we didn’t score a goal (they lost 2-0 to Arsenal in their last game at the Etihad Stadium), and because in the last four games here at home we conceded two goals in each game, so maybe in one week we threw in the trash all what we did in December.

“We need to try and recover in attack and in defence.”

Pellegrini moved to snap up Wilfried Bony from Swansea earlier in January to reinforce his striking options, but he will not be available until after his involvement with the Ivory Coast in the Africa Cup of Nations is over.