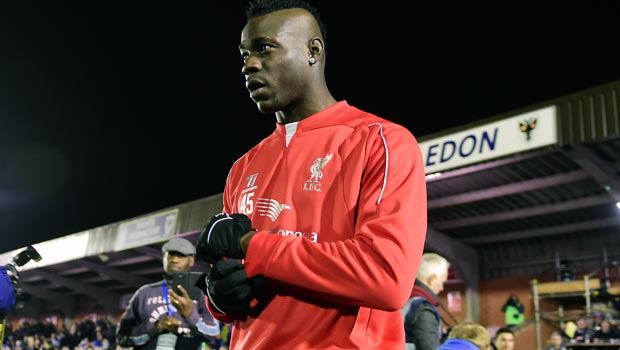 Liverpool boss Brendan Rodgers says Mario Balotelli has not been performing well enough in training to earn a place in his match day squad.

Balotelli was left out of the squad altogether on Saturday as the Reds were held to a 0-0 draw with Championship side Bolton Wanderers in the fourth round of the FA Cup at Anfield.

Rodgers has now explained why he made the decision not to include the Italian frontman in his squad.

“I am judging it every day in training – Mario is exactly the same as every other player, there is no special treatment for anyone,” said Rodgers.

“Fabio Borini and Rickie Lambert are working tirelessly in training and when they go on they have contributed and young Jordan Rossiter, on the bench today, has been brilliant in training and I have to judge it on that.

“If you want to contribute you have to be at it every single day in training in order to be in the squad on match day.”

He added: “He was fully understanding. He saw the level of performance against Chelsea (in the Capital One Cup) and in fairness to him he actually said it would be a struggle for him in terms of how he would play the game because he is a box player really.

“But there is much more asked of this team and he saw it clearly on the field the other night. I am confident he will respond well.”

The former Manchester City and AC Milan striker is yet to score in the Premier League for the Reds since his summer move from the San Siro and Balotelli could find himself further down the pecking order in the coming weeks.

England international Daniel Sturridge is close to making a return and could be involved in the Capital One Cup semi-final second leg at Chelsea on Tuesday.

The first leg at Anfield ended 1-1, meaning Liverpool need to score at Stamford Bridge to progress in the competition due to the away goals rule. A win for Liverpool is available at 6.02 or 16.00 to win 1-0.