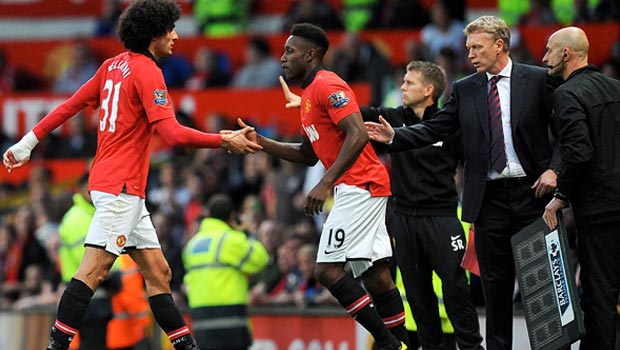 Marouane Fellaini is adamant that David Moyes will prove to be a good managerial appointment at Manchester United as long as the club give him time to prove himself.

The 26-year-old Belgium midfielder followed Moyes to Old Trafford from Everton last summer after the Scot was given the daunting task of replacing Sir Alex Ferguson who stepped down after 26 years in the hot-seat.

The job has so far proved to be a baptism of fire for Moyes with United out of the title race and also set to miss out on Champions League qualification as they sit in sixth position, nine points adrift of fourth-placed local rivals Manchester City ahead of Sunday’s mouth-watering Premier League showdown against in-form bitter rivals Liverpool at Old Trafford.

However, Fellaini, who has also struggled to live up to the £27.5million transfer fee which Moyes paid out to take him to United, has vowed to repay the manager’s faith and backed him to restore the club to the top of the tree in England.

“What makes United different is that they stand by managers,” Fellaini said. “You look at the career of Sir Alex Ferguson and he managed the club 26 years.

“You have to give David Moyes time as well. He is a strong character. That’s why he can take the pressure. Given time he will be good for Manchester United.

“Man United had the same manager for 26 years – to change that is not easy for anyone. The supporters and everybody else has to give him time.”

He added: “He is the most important person in my career. I could never say something bad about him because he has done everything for me.

“He has done so much or me that of course I want to repay him at Manchester United.”