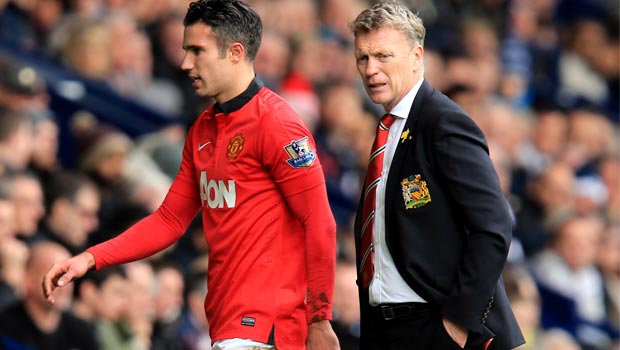 Manchester United boss David Moyes has defended striker Robin van Persie after the Dutchman claimed his team-mates were playing ‘in his zones’ following their 2-0 defeat to Olympiakos in the UEFA Champions League.

Moyes insists that Van Persie’s comments were taken out of context, following the 30-year-old’s interview on Dutch TV.

The comments were taken as a sign of frustration from the striker, who has endured a difficult second season at Old Trafford.

However, Moyes insists that there is no problem between him and the former Arsenal forward.

“If you actually read the whole transcript, I think it was taken out of context… we understand fully,” Moyes said.

“Robin is a really good player and we will do everything possible to make those opportunities work for Robin. A lot of what has been said (about Van Persie) isn’t correct.”

Moyes has also had to deal with claims that some of his players have stopped playing for him.

Some critics of the Red Devils claim the players are refusing to give 100 percent for the former Everton boss, due to the Premier League champions struggling in seventh spot in the table. They are 18 points behind leaders Chelsea, but Moyes insists he has the players’ support.

“I don’t know if it’s the right thing [to say] that they’re not playing for me,” Moyes said. “I think they definitely do, so I don’t accept that.

“I’ve been honest with the players and the media, I’ve tried to be straight as I can. I’ve done it with the supporters.”

The Red Devils side will need to be at their best to progress through to the next round of the Champions League, and they can be backed at odds of 1.47 to beat Olympiakos when the two teams meet at Old Trafford on March 19.