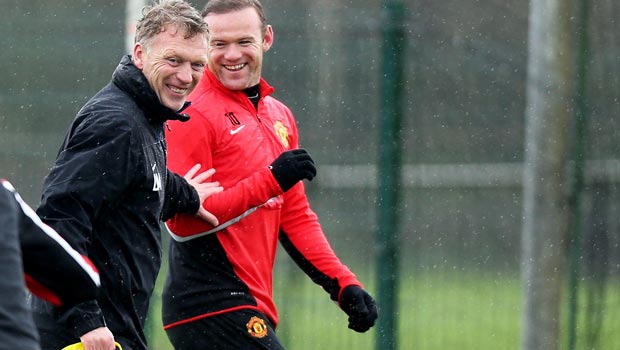 Manchester United boss David Moyes has praised Wayne Rooney for his performance after he was handed the captaincy on a temporary basis.

The England international was handed the armband for Saturday’s 2-0 win over West Ham, with a number of players out. Regular captain Nemanja Vidic was suspended, Rio Ferdinand was injured and left-back Patrice Evra was on the bench, with Rooney left to lead the team out.

Rooney scored two goals at Upton Park but it was his first goal that grabbed the headlines after his sublime strike from the halfway line found the back of the net, and Moyes admits he is delighted with his attitude.

“Wayne has led by example all season,” Moyes said. “Maybe wearing the armband, taking a wee bit of pride in wearing that, to show exactly what it means.

“I’ve said there will be no decision taken until next season, but we had injuries to Rio (Ferdinand), suspension to Vidic, injuries in part to (Patrice) Evra so we decided to put him on the bench, and I thought Wayne picked up and did what he needed to do.”

Moyes will be hoping that Rooney can fire again when his side take on rivals Manchester City on Tuesday night.

The Red Devils are 3.31 to win, with City 2.16, and Moyes is going into the game with more confidence after back-to-back wins.

“We go in after a better showing; if we play as well as we did at West Ham then we will make opportunities, we’ll make chances,” the Scot added.

“If we play with the same heart we showed against Olympiakos then we’ll be very hard to play against and have a big spirit in the game.”