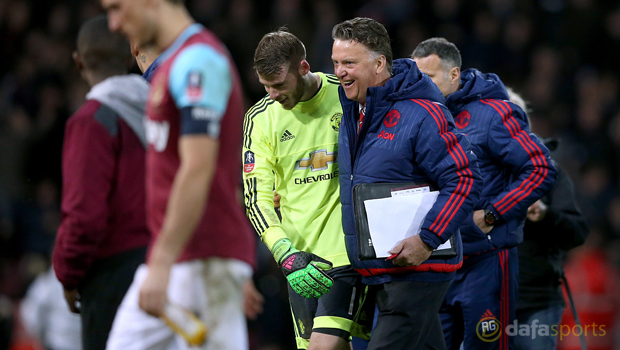 Louis van Gaal says he wants to win the FA Cup with Manchester United as he came to England to win trophies.

The Red Devils booked their semi-final spot courtesy of a 2-1 win against West Ham in their last-eight replay at Upton Park. Marcus Rashford and Marouane Fellaini scored the United goals and the visitors held out after James Tomkins had reduced West Ham’s arrears.

A semi-final date with Everton awaits Van Gaal’s team later this month and the Dutchman is eager to go ahead and lift the trophy at Wembley in May.

“I want to win a trophy in England. That is what I came here to do,” he said.

Van Gaal hailed his side’s performance after watching them control the game for long spells. He highlighted West Ham’s terrific home record this season and insisted that his own players had done well to bounce back from Sunday’s three-goal defeat to Spurs at White Hart Lane in such a positive fashion.

“You cannot deny that my team has a lot of fighting spirit,” said Van Gaal. “When you come to West Ham, who have not lost at home since August and have beaten every top club, and we controlled the game.

“I cannot say that when we lose 3-0. I’m very happy that in spite of that defeat we didn’t lose the spirit.”

Rashford curled home an outstanding goal to break the deadlock after half time and send the visitors on their way.

According to Van Gaal, the youngster has a willingness to learn that makes him stand out.

“He can cope with criticism also and he can say about himself, ‘yes manager you are right and I have to do that’. I think it is fantastic because there are not a lot of players who can see their self-image,” he added.

Man United are 2.25 to win the FA Cup this season, while their semi-final opponents Everton are 3.50.