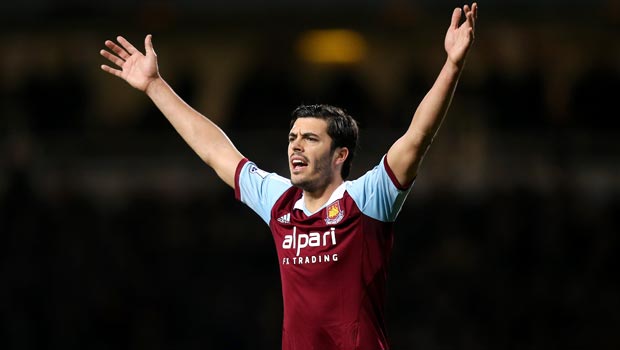 Defender James Tomkins has promised West Ham will be ‘up for it’ when his side travel north to take on Premier League title favourites Manchester City at the Etihad on Sunday.

The 12th-placed Hammers secured their top-flight status with two games to go following a 2-0 win over Spurs and have nothing but pride to play for.

But West Ham have proved to be party-poopers in the past, most famously when Kenny Brown’s goal denied Manchester United the title in 1992 – a game where the already relegated East End outfit put in an ‘obscene effort’, according to then United boss Sir Alex Ferguson.

And Essex-born Tomkins says West Ham are determined to give the Premier League title race one final twist.

“We’ll approach it in the same sort of manner as we approached the game against Tottenham. We know we can have a say in the title race which is good,” he told the club’s official website.

“It’s obviously a televised game now, which is great. We’re going to be up for it and hopefully we can have a say in who wins the league.

“At their place it’s always a hard place to play. Anything can happen on the day, look what happened a couple of years ago against QPR and what they did. They nearly caused an upset and hopefully we can have our say.”

West Ham have not won away to City in over a decade and are rank outsiders at 10.68 to bring that miserable run to an end. But they go into the game with renewed hope with the win over Spurs ending a four-game losing streak.

And like Villa on Wednesday night, who shut out City for over an hour before crashing to a 4-0 defeat, West Ham could prove a tough nut to crack on Sunday as Sam Allardyce’s men have now kept 14 clean sheets.