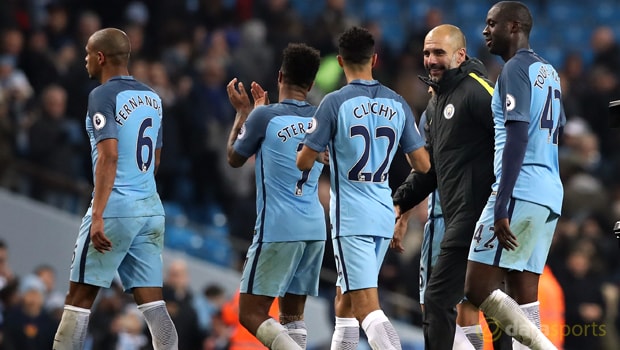 Manchester City boss Pep Guardiola insists the spirit of his squad leaves him with no doubt he is managing the right club.

The former Barcelona and Bayern Munich boss has come under scrutiny in recent weeks after back-to-back league defeats against Chelsea and Leicester.

His side got back to winning ways with a home success against Watford in midweek and on Sunday they fought back from a goal down to defeat Arsenal at the Etihad Stadium.

Theo Walcott scored early for the Gunners but City responded after the break with goals from Leroy Sane and Raheem Sterling to take all three points.

Guardiola’s side were under the cosh for much of the opening half but he insists there was no panic in the dressing room at the break, revealing he told his players Arsenal were ‘lucky’ to be ahead.

“I didn’t say anything to them at half time. I told them not to think about the score, I told them to keep going. Arsenal were lucky in the first half,” he said.

Guardiola says he has no doubts about his role at City and he was proud of the squad’s resilience.

Sergio Aguero has one more game to serve on his suspension and City are eager to have him back. “The guys give everything in every game.

I’m happy to be City coach. In terms of spirit it’s always there,” he told reporters.

“We liked to play today but it’s not easy because of high pressing from Arsenal and they defend compact.

When we have some of our players back we will hopefully score more goals.”

Manchester City are 4.50 to win the Premier League this season, while Arsenal are 11.00 after their latest loss.