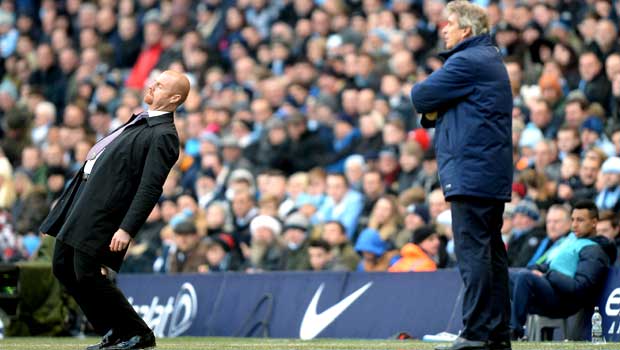 Manchester City manager Manuel Pellegrini admits his side were complacent as the Citizens let a two-goal lead slip at home to Burnley on Sunday.

The defending Premier League champions had a chance to close the gap on leaders Chelsea after Jose Mourinho’s men were held to a 1-1 draw away at Southampton in an earlier kick-off, and they looked on course to do that.

David Silva continued his impressive goalscoring form when the Spain international swivelled in the box and smashed an effort into the near corner past Tom Heaton.

Fernandinho then rifled in an effort from the edge of the area to give City a comfortable 2-0 lead just after the half hour mark, with many expecting that lead to increase.

However, Burnley showed their fighting spirit in the second period and caught the home side out just two minutes after the restart when George Boyd flicked in from close range, although the goal should have been chalked off with the forward offside.

The Clarets grew in confidence and Ashley Barnes rescued a superb point for the visitors when smashing in from just inside the box with little under 10 minutes remaining.

It was ecstasy for the away side, but for City it was certainly two points lost as they passed up a glorious chance to cut the gap on leaders Chelsea heading into 2015.

Pellegrini admits his side lost their focus and the Chilean believes the players thought the contest was over when they went 2-0 ahead.

“Until the last whistle the game is never finished,” he said. “Maybe winning 2-0 we thought the game was over.”

Manchester City will have the chance to redeem themselves on New Year’s Day when they play host to Sunderland. The Citizens are favourites at 1.22 with the Black Cats a long shot at 8.26.