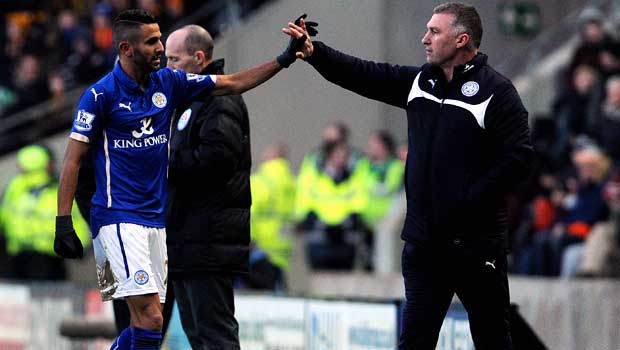 Nigel Pearson admits Leicester are still in “a lot of trouble” despite picking up a crucial 1-0 win away at fellow strugglers Hull on Sunday.

The Foxes made a strong start to the campaign and were sitting mid-table in the early stages of the season as they took to life back in the Premier League with relative ease.

Leicester even managed to record a sensational 5-3 victory over Manchester United, but it was after this result that events quickly went downhill for the newly-promoted side.

Pearson could not buy a win and, after 13 games without a victory, the pressure was mounting on the shoulders of the former Hull boss.

There was relief on Sunday though as Leicester, who are still bottom of the Premier League table, earned their first win in 14 thanks to a Riyad Mahrez goal.

The Algerian winger cut in from the right-hand side and fired a low shot into the bottom corner from just outside the penalty area to give the Foxes all three points.

The win put Leicester within touching distance of the sides currently above them in the table but, despite the victory, Pearson is under no illusions of the task his team are faced with.

“You need different qualities to win football matches. Some of our recent performances have been really outstanding but we produced a grit and determination to keep the ball out of the net and we rode our luck,” he said.

“But we can’t relax now. Let’s not give mixed messages: we’re still in a lot of trouble. It’s important not to get too far adrift.”

Leicester face a tough away trip to Liverpool on January 1 and the visitors are 6.76 to clinch all three points, whilst the hosts are favourites at 1.39.