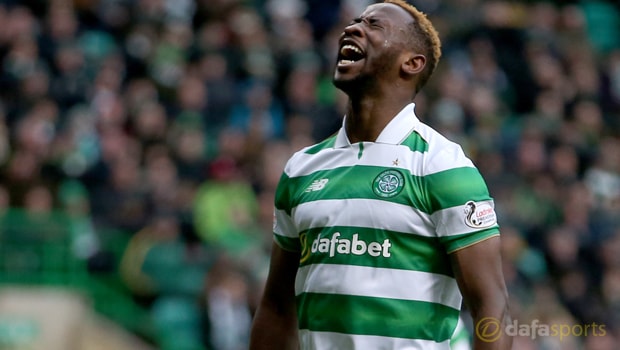 Moussa Dembele’s agent, Mamadi Fofana, has confirmed his client has no plans to leave Celtic in the near future.

The Frenchman has enjoyed a stunning first campaign in Scotland, scoring 13 goals in 23 league outings.

He was unable to help his side qualify for the knockout stages of the Champions League but Dembele looks to have guided the Hoops to another Premiership title.

The 20-year-old moved from Fulham for £500,000 and he has since been included in the France squad. He was linked with Chelsea in the January transfer window, but Fofana insists the striker is planning to stay put.

“Moussa doesn’t stress,” Fofana said. “He signed a four-year deal at Celtic and in his head he’ll be at the club for those four years.

“If he has to leave that will happen at the right time, but it’s not in Moussa’s head or mine.

In January there was speculation, but there will always be speculation if he does well.

“But Moussa’s not affected. I am not even thinking of the future. I don’t wake up in the morning thinking, where will Moussa go in the summer. “The future does not exist. The past has gone.

It’s about being a better player right now. The plan with Brendan and the club and Moussa is private, but I can say it will remain the same just now.

“If Celtic want to sell Moussa it will be a common decision which is taken between everyone. But at the moment I can be no clearer in saying there is no discussion between me and Celtic about Moussa leaving in the summer or even next January.”