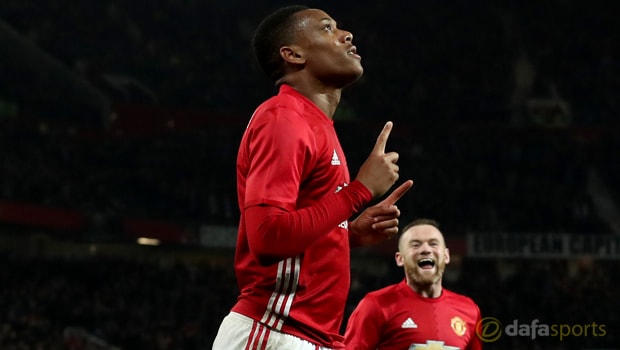 Striker Anthony Martial insists he wants to remain at Manchester United “for as long as possible” despite recent speculation linking him with a move away.

The Frenchman enjoyed a stunning first season at Old Trafford in 2015 but he has struggled for form so far this year.

After falling down the pecking order, the former Monaco man has had to work hard to impress manager Jose Mourinho.

He continues to compete with Marcus Rashford, Wayne Rooney, Zlatan Ibrahimovic, Jesse Lingard and Juan Mata for a first-team spot.

The 21-year-old has impressed in recent weeks though and Mourinho has rewarded him with three consecutive starts for the club.

Martial, who became the most expensive teenager in history when he left Monaco, will be hoping to keep his place for Wednesday’s clash with St Etienne.

United head into the game with a 3-0 lead on aggregate and Martial insists he is only focused on his future, rather than a move away.

“I love Manchester, I love the club and I love the fans,” said Martial. “(The fans) give me a lot of joy and I really enjoy having them backing me.

“I try to be as good as possible to make them happy, to satisfy them, so what I just want is to stay as long as possible at this club.”

Despite having home advantage, St Etienne are 3.40 to win, with the draw 3.20, while United are 2.15 favourites with Dafabet.