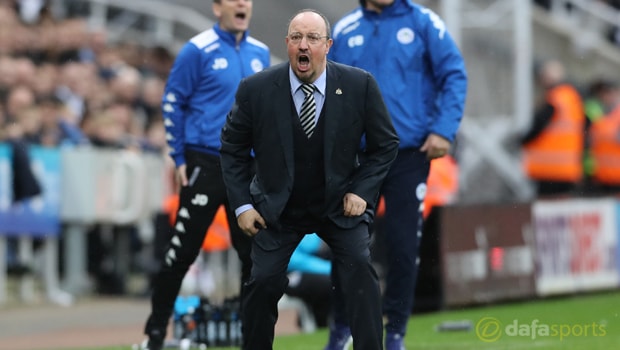 Rafael Benitez praised the character of his Newcastle side after they overcame a stubborn Wigan to move a big step closer to automatic promotion from the Championship.

The win, Newcastle’s first in four games, ensured they maintained a one-point lead over Brighton at the top of the Championship standings, however the top two have now crucially moved well clear of third-placed Huddersfield who lost at home to Burton Albion.

Newcastle are ten points clear of Huddersfield with seven games remaining, though the side in third do have one game in hand.

Dwight Gayle netted his 22nd goal of the season to give the Toon Army a half-time lead against struggling Wigan but St James’ Park was rocked briefly when Michael Jacobs levelled on 50 minutes.

Matt Ritchie restored the lead for the Magpies when he headed in a rebound off the post from his own half-volley before the hour-mark and they held on for victory.

Benitez was happy with his side afterwards and he reiterated the tough nature of the Championship, highlighted again as Brighton managed just a 1-0 win at home to relegation-threatened Blackburn and Huddersfield’s reverse against another struggling side in Burton.

“I would like to score five goals and be amazing, but at the moment we showed character, good reaction and personality to manage the situation,” said the Spaniard.

“We can improve on a lot of things, but we do a lot of things well. But when you see Huddersfield losing or Brighton winning 1-0 it shows it is not easy.”

Whilst urging more composure in key moments, the former Liverpool boss was keen to stress that his squad should not be hard on themselves with their primary goal of a return to the Premier League now within touching distance.

“We need a little more composure on the ball in the final third and then we will score more than we need. We are so close so we have to do well and not suffer,” he added.

Newcastle are 1.36 to win the Championship while Brighton are now 3.00.