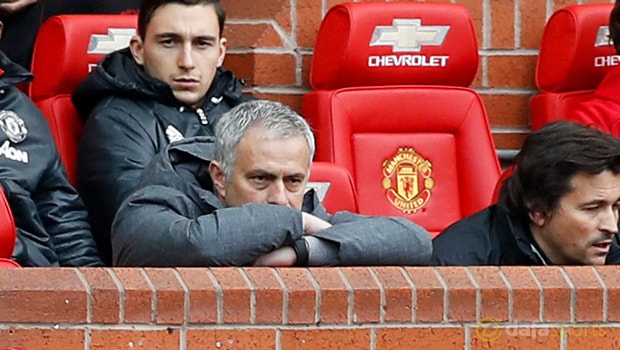 Jose Mourinho vented his frustration after Manchester United once more failed to win a home league game by drawing with West Brom.

The scoreless draw was an eighth time this season that the Red Devils have settled for one point at Old Trafford.

They dominated possession against Tony Pulis’ Baggies but couldn’t find a crucial goal.

Man United are the seventh lowest home scorers in the top division with only 20 goals in 15 games at Old Trafford this season.

West Brom are the fifth team to stop Man United scoring at home this season and Mourinho admitted his disappointment in the attacking quartet of Anthony Martial, Marcus Rashford, Henrikh Mkhitaryan and Jesse Lingard afterwards.

“I have to say my six players – Valencia, Rojo, Bailly, Young, Carrick and Fellaini were phenomenal. The other four? They have to score a goal,” Mourinho said.

The latest setback leaves Man United struggling to finish in the top four.

Third-placed Liverpool moved six points clear of them with their Merseyside derby win over Everton, albeit United have two games in hand.

Manchester City are five clear of United having played the same number of games while Arsenal will relegate Mourinho’s team to sixth if they win their game in hand on Sunday afternoon – against Man City.

Mourinho is dismayed the failure of his players to locate a ruthless streak in front of goal when the opportunity arises.

“When we have the last touch – we have to score,” Mourinho said.

But when you face the goalkeeper one-on-one, how many times this season have we not passed the last man and not scored the winning goal?”

Man United are now 3.50 to finish in the top four this season while they are 1.50 to beat Everton in their next game.