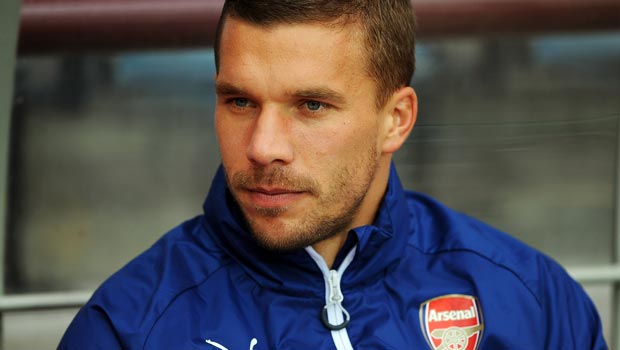 Lukas Podolski admits he is unhappy with his amount of playing time at Arsenal and could look to leave the club in the near future.

The 29-year-old is yet to make a Premier League start this season and has been limited to just four substitute appearances.

Podolski has made a three further appearances from the bench in the Champions League, scoring his only goal of the current campaign in the 2-1 win at Anderlecht last month.

He may have felt he would receive more playing time this season after first-choice striker Olivier Giroud was ruled out for six months with a fractured tibia in August.

But Gunners boss Arsene Wenger instead opted to sign Danny Welbeck from Manchester United, showing a lack of faith in Podolski.

While the striker insists he is happy to play for the north London club, he also says he is frustrated at not being picked in the starting lineup.

“I have to speak to Wenger because the situation at the moment is not good for me because I have to play, so we will see what happens,” Podolski told reporters after Germany’s 1-0 victory over Spain on Tuesday night.

“I am happy at Arsenal and happy in London but the only thing is I don’t play. I don’t get the chance to play. I play always ten to 15 minutes. I cannot be happy with this.”

Podolski has previously been linked with a return to Cologne, who he left to join Arsenal on a free transfer in 2012, but the club ruled out a move for their old player.

“We don’t have five million euros, and we can neither pay the transfer fee nor the salary of a player like Podolski.”

Arsenal return to Premier League action on Saturday night with a home clash against Manchester United. The Gunners are 2.20 favourites to take all three points while Manchester United are 3.21 and a draw is 3.29.