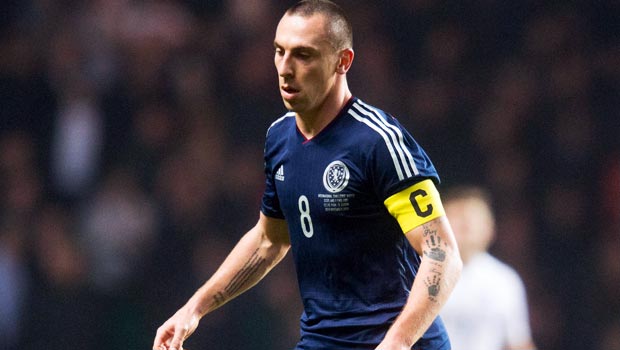 Scotland captain Scott Brown is confident the team will bounce back quickly from Tuesday’s 3-1 home defeat to rivals England.

Gordon Strachan’s side left Parkhead disappointed as they failed to upset the Auld Enemy in the first clash north of the border in 15 years.

Alex Oxlade-Chamberlain opened the scoring for the Three Lions before captain Wayne Rooney scored twice, either side of a consolation strike from Scotland left-back Andrew Robertson.

It was a disappointing performance from the hosts who have made a fine start to qualification for Euro 2016 but the skipper is certain they will return as strong as ever next year.

“The lads will be hurting from this but the main thing is the qualifiers, we have games to look forward to and we’ll bounce back,”
he told BBC Scotland.

“We let ourselves down tonight, we weren’t positive enough.”

Scotland beat the Republic of Ireland 1-0 on Friday to go level on points with Germany and the Irish in their qualifying group.

There were suggestions some of the players were tired from their efforts four days earlier but Scott has played down that suggestion and believes the team should have performed at a higher level.

“It was disappointing, we know we’re better than that,” Brown added.
“The main thing is we managed to get the three points against Ireland.

“It’s a good thing that we expect so much of ourselves, we’re just disappointed that we didn’t play to our game-plan, we didn’t get the ball down. England came and attacked us high up the park and we didn’t really know what to do.”

Scotland are priced at 15.00 to win Euro 2016 qualifying Group D, with Germany the current favourites at 1.22.